Newsletter
Sign Up today for our FREE Newsletter and get the latest articles and news delivered right to your inbox.
Home » A 2000 HD Road King Sure to Leave You Feeling Blue 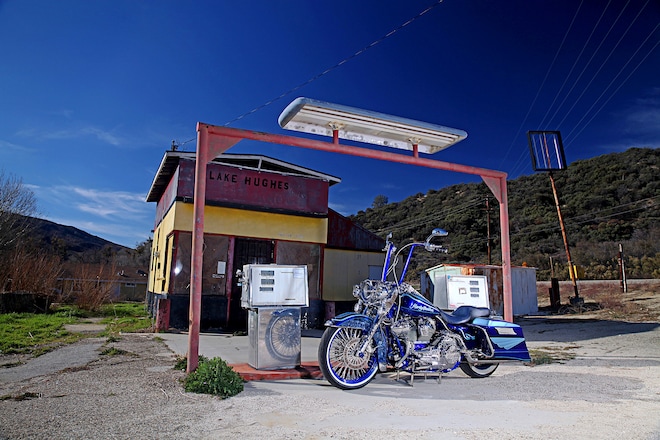 When Roy Martinez was just 16 years old he was already out cruising Hollywood Boulevard. At that time, it was the allure of the nightlife and the custom cars that got him going but since then times have changed, and changed drastically. For starters, police began enforcing anti-cruising laws, which killed the scene; and on the flipside, Roy has done much the same by creating this custom Harley, which is also killing the scene—but in a good way.

His 2000 Harley-Davidson Road King is a definite looker. It’s a neck snapper that makes you look thrice, and with enough chrome to get a Turtle Wax rep giddy, it’s easy to get lost in the massive amounts of candy, chrome, and custom engraving by Gabriel Martinez. This Harley represents his dedication to the customizing scene.

Encasing the engine and frame are the fairings, which were painted by Cesar Quintero, and his use of Cobalt Blue and deep purples by House of Kolor give this bike a luster that can’t be beat. From there it was muraled by Shinji Hara and then outlined and leafed by custom artist Leo of LG Pinstriping of Simi Valley, California.

Out front, this beast is led through local shows and traffic by a set of Ridewright Wheels that measure in at 21 inches up front and 17 inches out back. To keep the bike grounded and levelheaded, Roy had a ViAir setup installed, which was done by Rapture Customs.

When asked what started this build, Roy says it’s his passion for building cars. But he’s also quick to mention, that all he wanted to do at first was chrome one simple piece, and once that happened it was game over. Five years later, along with the help of his son, Gabe, and his wife, Sonia, he was able to create what you see here.