Newsletter
Sign Up today for our FREE Newsletter and get the latest articles and news delivered right to your inbox.
Home » 2019 Southwest Choppers Softail – Not Off The Shelf 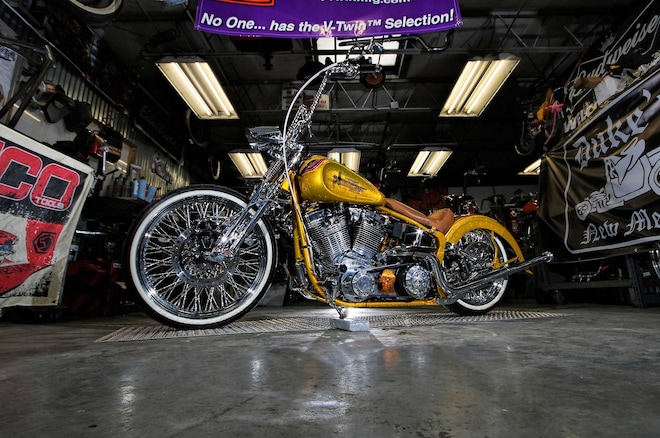 Jerome Rocha is no stranger to custom cars and bikes, he has building cool rides for over 35 years. He owns a small shop in Albuquerque New Mexico called Southwest Choppers. Don’t let the name or the size of the shop fool you though he has been built many custom cars here. Most people buy a project and then tear it apart and go from there. Jerome didn’t start this bike project that way though. He started with the brand new frame that had been hanging in his garage. After getting it titled he started building the one off motorcycle. The custom tank has a custom recess and chromed Southwest Choppers zia logo. The rear fender also received the custom treatment with a frenched in taillight. After mocking up the rest of the bike it was completely disassembled for paint and chrome. Jerome did all the bodywork and then painted the frame and all the tins in Spanish gold. With the help of Mario Moya they started laying out the multiple color graphics. Mario also added gold leafing and pinstriping before Jerome added layers of clear. With the paint curing he started finally assembly on the bike. An old school springer front end was added with a custom headlamp made from a 58 Impala Mirror. Along with a custom set of Twisted handle bars. The new chromed out 120 cubic inch motor is not just for show the bike really gets down the road. The 100 spoke American wire wheels really give that old school vibe. The custom leather and Ostrich seat was stitched up by Chito’s Upholstery of Albuquerque. When Jerome set out to build this bike he wanted a mix of new and old school flavors and we think he did a beautiful job.

Body/Paint
Candy Gold with base with Pink, Blue, purple and butterscotch patterns