Newsletter
Sign Up today for our FREE Newsletter and get the latest articles and news delivered right to your inbox.
Home » 2014 Harley-Davidson Road King – A Date With Fate 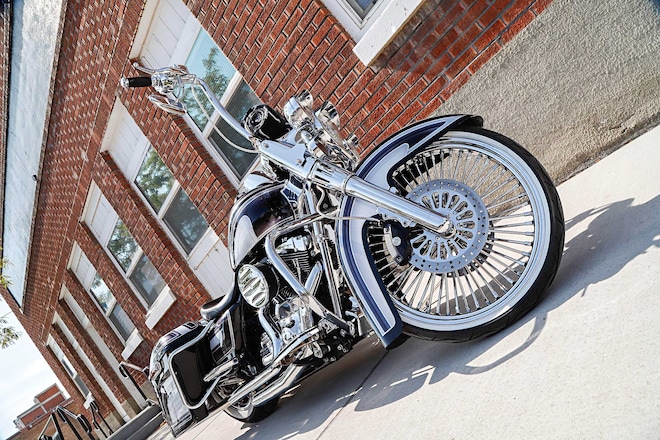 It was a brisk summer day, you know, one of those days that practically begs you to go out riding. But this day was different. In typical fashion, Paul Stierle would kick-start his old-school chopper, but little did he know he was on a date with fate.

That day he went to pick up his date, Kim. They already had an agenda planned, but neither of them knew it would be a ride for eternity. As time passed, one cruise led to another, and as their love grew so did her passion for custom bikes. Soon thereafter, one thing led to another and the pair soon found a new destination to travel to: marriage.

After marriage, it seemed as if they’d change out bikes every few years, but it wasn’t till the purchase of a 2014 Harley-Davidson Road King that they realized they had something special. “When I was a kid, I can remember my father on a bike and now I get to share that passion with my wife and four kids,” Paul says.

“We wanted to build a real head-turner,” Paul says. But with a solid, jet-black stock Harley they had a long way to go before that would come to fruition. “In Idaho, the go-to shop for custom Harleys is Bonneville Baggers,” Paul says, and after a consultation with owner Manny Armendarez it was time for them to get to work.

The original 2014 110-twin cam was overhauled and upgraded with a variety of chrome accessories, and Bonneville Baggers added their signature fishtail exhaust with sweep. That original jet-black paint was stripped and replaced with a midnight black two-stage base and then covered with a black cherry, along with pearl white patterns accented with numerous tape shades, flake, and pinstriping. The seat was covered in black leather with silver diamond stitching while a custom Universal Air Ride system handles altitude changes.

With those mods complete, the final stages came by way of a new set of whitewall tires and wire wheels. “The fact that this bike is a showstopper yet reliable is our favorite part,” Kim says. “It has that show-and-go quality we were looking for,” Paul adds.

While most people opt to garage a bike of this caliber, Paul knows that the more miles they put on it, the more memories they accumulate. These days, the bike has become the center of the family, with every member taking turns polishing the motorcycle. While the bike continues to take its fair share of trophies and awards, those do little in comparison to the admiration it receives from the general public. When asked if it’s become a common occurrence that’s overlooked Paul says, “It never gets old seeing the look on people’s faces when our bike passes by.”