Newsletter
Sign Up today for our FREE Newsletter and get the latest articles and news delivered right to your inbox.
Home » 2013 Harley-Davidson Softail Deluxe – Draggnazz 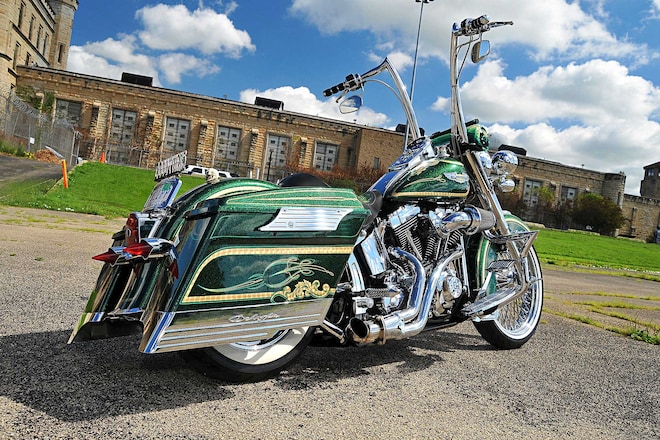 The lowrider culture wasn’t something that came as a surprise to Gary Collett Jr., of New Albany, Indiana. It was at 14 years old when he first picked up a Lowrider magazine. “I was working for Kroger and every day I would pass by the magazine aisle,” Gary says. “One day there was a car on the cover that just stopped me in my tracks.” Gary was always trying to be unique and creative throughout his childhood so when he saw the colors and styles on the cover of Lowrider he was hooked. At 16 he purchased his first car, a Cadillac coupe.

After going through Cadillacs and Lincolns Gary decided he wanted to build something that nobody had in his rural city. His first foray into the motorcycle world was small, as he was taking baby steps into the new and exciting world. “I first bought a Chopper and then went to a factory Yamaha,” Gary adds. “I was missing something but I just couldn’t figure out what.” After a visit to the local Harley dealership for what was just window-shopping at the time, Gary ended up with his dream bike.

The 2013 Harley-Davidson Softail Deluxe Hard Candy custom motorcycle that he chose had to be shipped from the manufacturing plant in Milwaukee to Louisville, Kentucky, where Gary picked it up. Gary loved the custom green edition of this model and wouldn’t settle for anything else. Almost immediately, Gary and his friend Kyle Guiffre added the larger 52-spoke Fat Mammoth spokes replacing the standard 40-spokes from the factory.

Once the Harley had the right wheels the suspension was next, with a Shotgun Shocks air ride added to bring the bike lower to the ground. Custom-made apes were built by Marco Ramirez from scratch and then the motor was next to get upgraded. The 110ci Stage V kit outshined the stock 103ci, bringing the new horsepower to 119 with a 127 torque. A new transmission and heavy-duty clutch plates were added as well.

Gary brought the new and updated Softail Deluxe to Josh Culver at Culver Customs in Louisville where new greens and gold filigree leafing were added, setting the motorcycle above the rest. The seat was sent out to Long Beach, California, where Juan Gonzalez at Nomad Leather designed a one-off custom seat. The next stop was Scott’s Electronics in Jeffersonville, Indiana, where Hertz components were added for better sounds. Gary found some custom bike builders overseas and had custom turning lenses built and shipped from Australia and his oil and gas cap from Poland. Nasty Baggers built derby covers with the Good Times logo to represent his club. For a touch of creativity, Gary added some used bullets he shot to cover the luggage rack holes.

“Draggnazz” got its name because Gary was constantly dragging the rear end turning corners and “accidently” waking up his neighbors while he was coming home at late hours. Gary wishes to thank his father Gary Sr. for all his support and love and is honored to make him proud with his custom Harley. A special thanks go to his club brother Kyle Giuffre for inspiring him for the past 22 years, Scott Wieburing from Scott’s Electronics, Charles Tonna from Custom Kraft, Juan Gonzalez from Nomad Leather, Josh Culver from Culver Customs, Marco Ramirez from After Six Customs, Fredrick at Nasty Baggers, and, most importantly, his two children, Gary and Olivia.