Newsletter
Sign Up today for our FREE Newsletter and get the latest articles and news delivered right to your inbox.
Home » 2011 Harley Davidson Road Glide – La Catrina 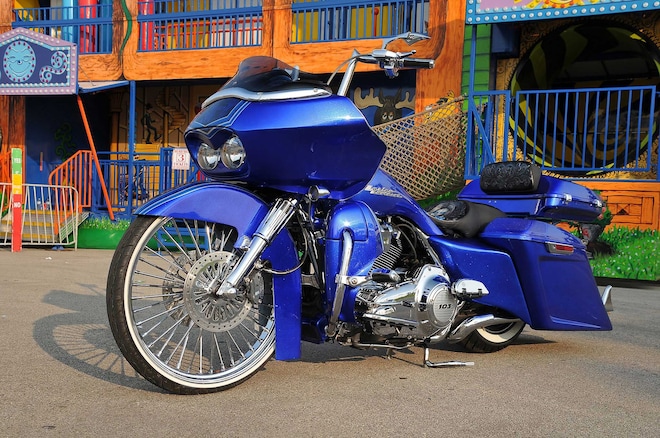 A woman smartly dressed with her face made up to represent a decoratively painted skull is known as La Catrina. Day of the Dead or Dia de los Muertos is one of the most honored Mexican traditions throughout the country. The holiday is to gather family together to pray and remember friends and family who have died. Jorge Madrigal holds dear his Mexican tradition and honors the culture in every way. As a young boy, he admired those who would ride together in packs on their Harley bikes. And when he moved to Milwaukee, Wisconsin, the home of Harley Davidson, his love for the motorcycle brand grew larger.

Driving around in a 2004 Ford F-150 he would pass Harleys daily and wish that just once he could trade his bulky truck for the sleek feel of a Harley. The time came to find one that he would cherish and treasure, so Jorge began his search. He located a 2011 Harley Davidson Road Glide in an online advertisement in Michigan. Once he contacted the owner, he found out the reason the motorcycle was being sold was the man had gotten carpal tunnel and could no longer wrap his hands around the grips. Jorge took off for the six-hour drive and proudly traded his pickup for the full-dressed Harley.

The Road Glide was the stock ugly brown with basic wheels, and while driving home Jorge couldn’t help but think he looked like a grandpa on his bike because of the lack of personalization. Once the bike was back home from the long trek, he contacted his friend Peter in Milwaukee for a full body kit for the Harley. With the help of Team Gileto Custom Works, Peter stretched the tank and center console, stretched the side covers and extended the rear fender and saddlebags. Dual exhaust slots were cut out for a new exhaust system. Once the frame was ready, Jorge added the 26-inch DNA Mammoth Fat Spokes.

For a better stance Jorge had Team Gileto, who consists of Pedro Lopez and his son Giovanni, add a full suspension install on the Road Glide. The air ride was added to the front and rear of the bike to be able to drop it low and ride like a lowrider and also to park it on the center stand and keep it upright without it being angled like most bikes. As a huge Los Angeles Dodger fanatic, when it came time to remove that stock brown, it was a no brainer to switch to a Royal Blue. Silver metallic was used as the basecoat and two pounds of flake was spread throughout the paint for a bright shine. The House of Kolor Kandy Blue was sprayed throughout the newly shaped frame and custom lace and airbrush was painted on by Pedro and his wife Tiffany at Team Gileto.

The next step was making sure that Jorge would be heard coming from around the block. A ten-speaker sound system was installed with one 10-inch subwoofer for bass. An Alpine head unit was mounted at the helm to control the songs blasting through the bike’s new speakers. In order to stand out at shows and while cruising, Jorge needed the engine dressed up with chrome so it would shine when the sun hits it. Team Gileto took charge and plated and shined every single motor piece that was available to be seen. Once completed, Pedro and his son added lights all throughout the Harley to stand out at night. The multi-color lighting system is controlled at the tip of his fingers through a Bluetooth controller. The final step was creating something that would elevate his Harley to the top of the state known for Harley motorcycles. He contacted Juan Gonzalez out in California and sent his seat to him. Juan took Jorge’s ideas and created a custom tooled leather seat with the La Catrina theme to it.

Jorge wishes to thank his girlfriend Claudia Martinez for all her help and support. She constantly pushed Jorge and motivated him to do better and he owes his build to her. He wishes to thank the entire crew at Team Gileto for creating his dream and building one hell of a masterpiece. Jorge also wishes to thank his daughter Nayomi for all her patience and accompanying him to shows and shops for work. Jorge’s girlfriend has a salon that she named Ponte Catrina which translates to elegant woman, and that’s exactly what he designed his Harley Road Glide to be.

Paint
silver metallic base with two pounds of flake, House of Kolor Kandy Blue with patterns, lace and Lana murals