Newsletter
Sign Up today for our FREE Newsletter and get the latest articles and news delivered right to your inbox.
Home » 2009 Harley Davidson Fatboy – Gordo 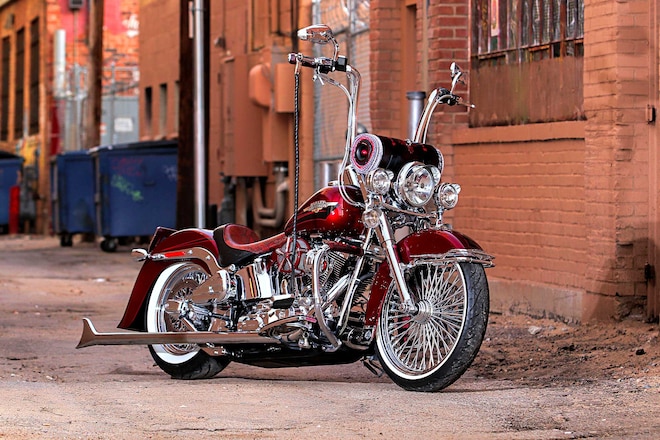 Addiction comes in many forms, for Peter Romero It wasn’t drugs or lowriders it was motorcycles. From a young age he would always see his uncles Gary and Tim riding motorcycles around town and said to himself that one day he would be riding right along beside them. Peter works for his families tractor dealership and one year for Christmas he received a 2009 Harley Fatboy as a bonus. Most would be content with just having the bike. But not Peter, He had other plans for the bike. So with the help of his Uncle Gary the tear down started, after stretching both fenders they sent it off to Sandia Collision to add the custom candy maroon but keep the OG factory graphics. While the paint was drying a ton of chrome accessories were added along with a set of 16″ ape hangers. To go along with all the shiny stuff on the bike Peter wanted to accent it with some custom leather work. He contacted Al’s Upholstery to redo the seat. Wanting to add more leather he contacted Black Sheep Customs and they did a bunch of custom work to. During the build his uncle Tim passed away so a custom leather piece was added to pay homage to him. He also added his daughters name to the bike and she already wants her own bike to cruise beside her dad. A custom Audio system was added to get the tunes playing and those long cruises to the rally’s with his uncle Gary.