Newsletter
Sign Up today for our FREE Newsletter and get the latest articles and news delivered right to your inbox.
Home » 2008 Harley-Davidson Softail – Family Tradition 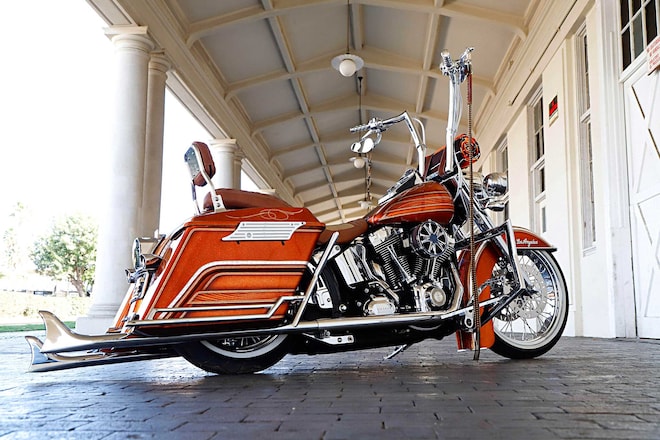 It is said that we are all a product of our environment. Tim Muniga of Chino, California, is a prime example of this saying. For him, classic cars, mini-trucks, and Harleys have always been a family tradition. His grandfather always had older trucks, his father seemed to often be riding something on two wheels, and his mother would buy late-models cars, paint them, have the interior redone, sell them, and then start the process all over again on a new project. It’s no wonder that by high school Tim was already driving a 1955 Chevy pickup. Well … by driving it, we mean only when his parents wouldn’t find out because he didn’t quite have his driver’s license yet. From the pickup, he would move onto a motorcycle. As time went on, a variety of other vehicles would follow. For his latest project he decided to build a Harley-Davidson Road King, but when a friend made him an offer he couldn’t pass up, those thoughts and dreams quickly adapted to his new 2008 Harley-Davidson Softail.

The Softail has gone through several transformations. From a stock, all-black finish with some chrome upgrades to a two-tone version with white fenders, hard bags, and set of custom 40-spoke wheels with a 21×3.5 up front and an 18×6.5 for the rear. After several shows and a few rides during the annual Laughlin River Run, Tim came to the conclusion that the time had come to go all-in on this bike. While the Softail would receive a complete overhaul, the first thing on the list was a visit to longtime friend Steve of Trigger Happy Paint in Colton, California. There brainstorm sessions would lead to test panel after test panel, but none would provide the desired results. “I wanted something completely different,” Tim says. But when they laid down a House of Kolor candy root beer brown with some micro and jumbo flake, he knew he was finally on the right track. While the paint process was taking place, the overhaul continued with a laundry list of upgrades, like an all-new Pioneer audio system, Shotgun Shocks air-ride suspension, as well a 2-inch lowering kit. The original ape-style handlebars would be changed to a crushed tube design, which was also carried over to the guardrails and crash bar. With the chrome back from San Antonio Polishing, it was time for the assembly stage to begin. The final result gave Tim a look and style that would fit into a show, event, or bike run. “I ride with all different kinds of people, from all ages and backgrounds,” Tim says. His versatility is a reflection of the variety of cars, trucks, and motorcycles of his childhood influences.