Newsletter
Sign Up today for our FREE Newsletter and get the latest articles and news delivered right to your inbox.
Home » 2008 Harley Davidson Road King & 2015 Road Glide Lowriders Form the Silver & Black Attack 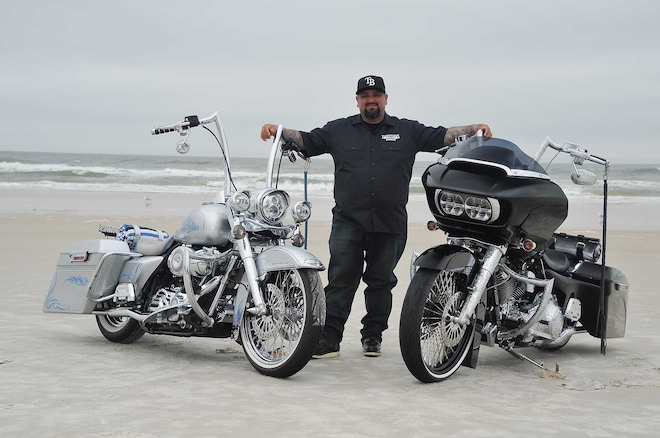 The 2008 Harley Davidson Road King and 2015 Road Glide you see pictured are the result of simply wanting “more.” While most lowrider enthusiasts would be quite satisfied with having the vehicle they poured their heart and soul into gracing the pages of their favorite magazine, Eddie Cardenas of Deltona, Florida, was just not satisfied. Although it was his dream to get onto the pages of LRM but he wanted even more than that.

Back in 2008, Eddie’s ’84 Buick Regal “Mi Gusto” was given the love it deserved and instead of Eddie having his dreams fulfilled, he decided to go a different route. “I knew I couldn’t build another G-body,” Eddie tells LRM, “it was time to try something new, something unfamiliar.” Unfamiliarity was something that Eddie was skilled in overcoming – making the best of everything he could. Eddie walked into a Harley Davidson dealership in Sanford, Florida and picked out this ’08 Road King and happily took his stock motorcycle home.

With a lowrider background, Eddie wanted to make this Harley his show bike and took the first step to creating something that would turn heads and stand out among a sea of others. It started as a very basic silver with no real distinction of its curves or style, so he brought the Harley to John Bianco at John the Painter in Deland, Florida. The basecoat was replaced by Matrix silver flake spreading throughout the tanks and fenders. Mikey the Pin stripper was brought in for the creative pinstripe that runs all throughout the bike.

Around this time Eddie started to realize that he couldn’t just take the new bike out and around town to enjoy because it was going to be strictly a show piece. Of course, he had the itch to ride a custom bike, so he had to make an executive decision.

Eddie went back to the Harley Davidson dealer and purchased a brand new 2015 Road Glide. With one Road King and one Road Glide, things were about to get interesting…and expensive.

He was able to enjoy the ’15 for a few months, but we all know what happens when our vehicles are in stock condition for too long. Right around 50 miles in, Eddie stripped the engine parts off and sent them out for chrome and engraving.

While waiting for the parts, Eddie had JT at Defiant Motor Sports added the stretched bags and side covers. Eddie ordered the stretched front fender from Bad Dad, and once completed, he had J.T. paint all the new pieces to match in Vivid Black before reassembling everything.

Eddie contacted Mickey at Dirt Baggers in Long Beach, California, and ordered new wheels and tires. He added a triple tree rake setup from HHI so that the new 23-inch wheels would fit properly. With the ’08 and ’15 side-by-side, Eddie decided it was time to bring both bikes lower to the ground. J.T. installed the Dirty Air rides in both Harley Davidsons using Viair compressors. On the 2015, Eddie added more custom flair by including a custom Mexican blanket or “Zarape” with laser engraving on the hammer handle. Around the zarape are straps with 40-caliber bullets made by Adrian at Estillo Brand in Arizona.

With so many Harley Davidson Road Kings in Florida, the custom additions and flare Eddie added makes his the King of Kings. As for his 2015 Road Glide, it causes quite the rumble through the neighborhood. When asked what he wanted to name it, he smiled and said “Barrio Bully,” which is fitting.

Eddie wishes to thank the man upstairs, knowing that he’s been blessed throughout his life. His dream came to life and he wants everyone to know that if you dream it, it can happen. He wishes to thank his beautiful wife Laura and their kids Eddie Jr, Nayari and Nayeli for always being by his side and supporting him through the good times and even the expensive times. Eddie wanted to express his gratitude to his club Traditions and to his brother-in-law, Isaac (Chucky) for always being there to help. Although you might not want to live near Eddie when he cranks up his two Harley’s, it’s certainly fun to be around these massive machines.

When Robert Trevino isn’t designing and building custom pools he’s infatuated with motorcycles. So, when it came time to build his own, he went all-in and dove into the deep end.

Nokturnal Car Club is known for their radical rides, but up until Richard Celedo came into play, they certainly weren’t known motorcycles

For Abel Macias it all started with a passion for lowriders and competition.