Newsletter
Sign Up today for our FREE Newsletter and get the latest articles and news delivered right to your inbox.
Home » 2007 Harley-Davidson Street Glide – Hard-Core Harley 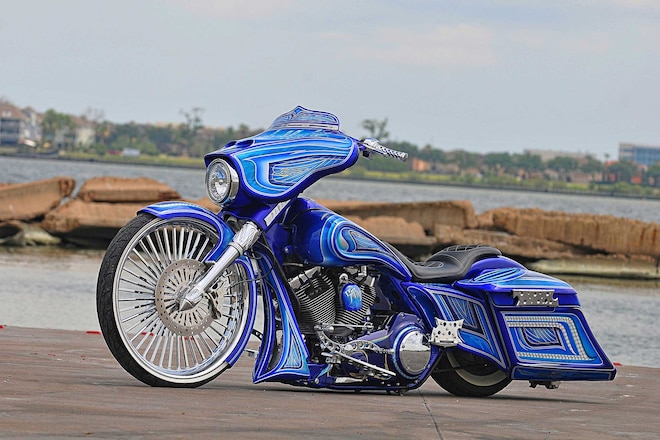 In 2006, Willie G. Davidson of Harley-Davidson introduced the world to the FLHX Street Glide motorcycle, specifically to be his personal ride. It wasn’t a big seller for the company until 2007 when they released the larger motor and a six-speed. Roland Yanez of Angleton, Texas, always wanted to follow in his father’s footsteps. “My dad was a hard-core Harley-Davidson rider,” Roland says. “My start was in lowrider cars but eventually I would catch up with him.

At 30, Roland purchased his first Harley, a Sportster, which is one of the smaller models. After years of getting used to riding a bike, he progressed to the Deuce model and then finally graduated to the Street Glide. The Street Glide offered a smoother ride and bigger body for he and his wife, Rose, to ride. Purchasing the 2007 Harley Street Glide from a friend’s uncle, the Harley had some aftermarket wheels and minor upgrades, but Roland had much bigger plans.

The very first thing Roland did was switch the wheels to a larger and more lowrider-friendly 26-inch Big Fatties. “Everything kind of just flowed from there,” Roland adds. “I started buying parts and when I changed one part the other parts looked off.” In order to stand out immediately, He decided that he wanted a neck-turning paintjob that would stop people in their tracks. He traveled to Michael “Sic” Cato’s shop where the paint master laid down heavy coats of House of Kolor blues and purples. The next step was adding the wild and flowing pinstripe, along with the leafing.

In order to introduce additional performance upgrades to the Street Glide, Roland enlisted James Mobile Cycles where the Harley was given a huge boost in power. To make the panels flow better, the side filler panels were stretched, along with the gas tank done by Dirty Bird Concepts. To complete the high-quality build, Roland turned the Harley over to Kevin Henry of Liquid Rides who upgraded the lighting and added LED strips under the tank and fenders, accentuating the upgrades.

Henry and his hard-working crew added a full stereo setup in the Street Glide that consists of a Pioneer flip-out unit and JL Audio components, including two 8-inch subwoofers in the side bags. Dirtywork LLC added a full air-ride system, bringing the Harley lower to the ground at the touch of a custom switch designed and installed by Grip Switch. For a seat, Liquid Rides designed a suede custom seat large enough for both Roland and his wife. Roland’s good friend Juan Gonzalez performed the final tweaks, making sure that the Street Glide was at the very top of the game.

Roland wishes to thank his beautiful wife Rose for her support and their three kids Briana, Ciara, and Dominic. Roland wishes to extend a huge thanks to his painter “Sic,” James at James Mobile Cycles, Kevin Henry with Liquid Rides, Vic Rosales, Ricky Garcia, Goe Harley-Davidson, SMT Machining, and Dirty Bird Concepts for all their help.