Newsletter
Sign Up today for our FREE Newsletter and get the latest articles and news delivered right to your inbox.
Home » 2007 Harley-Davidson Softail That Demands Attention 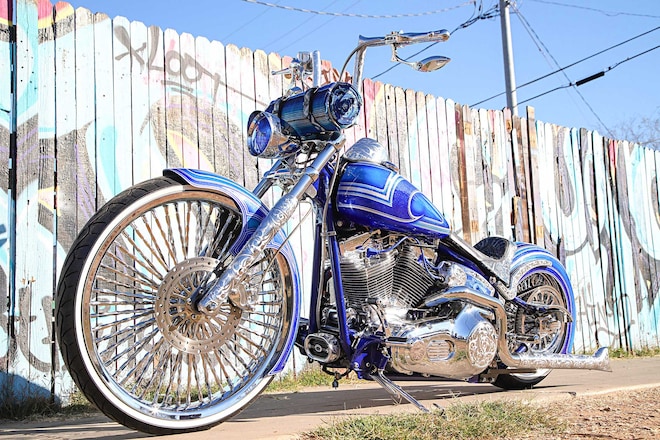 If you’re ever cruising the streets of Mesa, Arizona, chances are you’ll spot Aaron Martinez riding through the streets on his uniquely customized Harley-Davidson Softail. There’s nothing like this $46,000 custom bike. At first glance, the deep blue candy paint demands the attention of onlookers, but a closer look reveals the intricate details, including the Aztec-inspired markings, an artistically airbrushed black and white mural that depicts Aaron’s wife, Julia, as an Aztec princess, and a hand-tooled leather seat. Other notable features include chrome and engraving on multiple fixtures, including a double fender—which is two fenders welded into one—and a stroked-out engine equipped with a big bone kit and geardrive cams.

Aaron proudly rides “Chucking Deuces” alongside his club Society. He makes a living through a day job but spends almost every minute of his free time adding the finishing touches to his bike.

Since birth, Aaron has carried the classic car and bike culture in his blood. As a newborn freshly discharged from the hospital, Aaron’s parents drove him home in a timeless 1964 Impala SS. As an adult, he kept the tradition going when he purchased a 1962 Impala and joined a club. Aaron is thankful for the constant support he receives from his wife and three boys. His family usually accompanies him to car shows in their hometown. Next, Aaron is focusing on adding a front axle air-ride kit to “Chucking Deuces” to switch up the feel of his ride. In the classic car and bike scene, change is constant.

Engine
Original 2007 with twin can, full show chrome engine leading to a pair of fishtail exhausts

Body/Paint
Candy blues over a silver base with tape shades, patterns, and artwork by Tim Lowry