Newsletter
Sign Up today for our FREE Newsletter and get the latest articles and news delivered right to your inbox.
Home » 2006 Harley-Davidson Deluxe – Suavecito 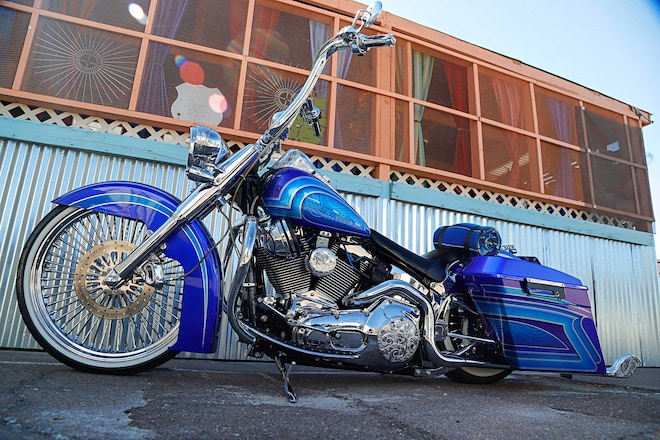 Growing up, Jesse Hernandez was surrounded by a family with an affinity for church and lowriding. It’s a situation that many of us are all too familiar with; it was his dad and uncles who would always be wrenching on the latest and greatest of that time. From 1963s to 1974s, G-bodies to bikes, being surrounded by the lowrider lifestyle let him know early on that he was going to build one for himself.

But fresh out of high school his passion for lowriding took a back seat to his desire to serve his country, so he wound up enlisting in the Marine Corps. Soon, those days spent in the garage were replaced with infantry training-some 16 years and four combat tours later, things have changed. Now in retirement, he’s not sitting back to watch life pass him by. He’s taking the bull by the horns and finally building the cruiser he had always wanted, which came by way of a 2006 Harley-Davidson.

Months after purchasing his Harley-Davidson Deluxe it was placed in the hands of Alex of Modern Arte. It was there the intricate paintjob you see was born. A silver flaked base served as the canvas for a multitude of candies and pearls. From oriental blue to blue jean blue, the paintjob is accented by a Burple Kandy that tapers into a fade, and one will also find the application of fingerprint effects. Pinstripe lines bring it all together and the final step was to glaze over 10 gallons of Matrix clear to seal the deal. Of course no lowrider is complete without a custom suspension, so it was lowered 2 inches.

It’s a build that’s been a longtime coming and now that it’s complete, Mr. Hernandez is now rollin’ with a bike that commands the respect so many others demand. It’s been a long journey to get where he’s at, but along the way he’s not only leaving behind one killer bike but a life worth living and one built on purpose. He’s fought for our freedom, carried on the values of lowriding, and on behalf of the lowrider community we’d like to thank Jesse-and all other service members-for protecting this great country and the life and liberties that come along with it.