Newsletter
Sign Up today for our FREE Newsletter and get the latest articles and news delivered right to your inbox.
Home » 2002 Harley-Davidson Road King – Learning Curve 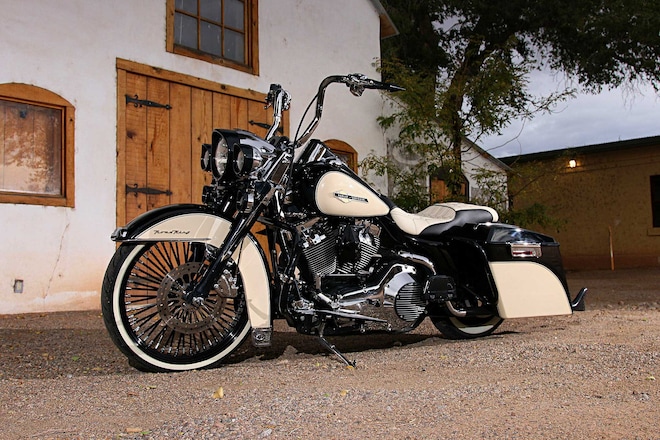 The will to learn something new sometimes drives us to do some crazy things. For Octavio “Tavo” Bustillos it was his love for motorcycles. The only problem is he had never owned one and didn’t know how to ride one.

His longtime friend, Chris Florez, always had some cool bikes but Tavo could only dream. Florez told Tavo one day, “You buy a bike and I will teach you how to ride it.” That was all he needed. Now he was on the lookout for his dream bike he could call his own. He soon found one at a local Harley dealership and went in to make the deal. The bike was trailered home. The next morning it was time for his first riding lesson. On his maiden voyage, Tavo drove right into a parked van. He bike was pretty much totaled. Tavo was a little hurt and quite heartbroken but his spirits remained high.

After he healed up, he assessed the bike’s damage and with Florez’s help a plan was set to rebuild it better and badder than before. Rebuilding the bike started with pulling it all apart, straightening the frame, and replacing the mangled front forks. All the tins and saddlebags were sent out to Carlos Serna to get cleaned. Serna stretched the saddlebags and fenders and then did all the bodywork before laying down a two-tone black and khaki classic Harley-Davidson-style paintjob.

While the parts were getting painted, Florez and Tavo freshened up the motor and drivetrain. Since the front wheel was damaged in the accident it was time to step it up a little. A set of DNA fat spokes wheels were added to a 21-inch front and 16-inch back wrapped in Avon tires. The seat was shaved and lowered and 3 Angels Upholstery stitched up a new cover.

The bike was nearing completion, but Tavo had been so busy rebuilding the bike he still hadn’t had a chance to learn how to ride. Once the bike was completed it was again time for him to learn how to ride. This time they found an old parking lot to practice in-with no vans around. After a few hundred times around the lot he was ready to take it out on the streets. There has been no stopping him; he rides everywhere now.