Newsletter
Sign Up today for our FREE Newsletter and get the latest articles and news delivered right to your inbox.
Home » 2002 Harley-Davidson Heritage Springer – From Schwinns to Springers 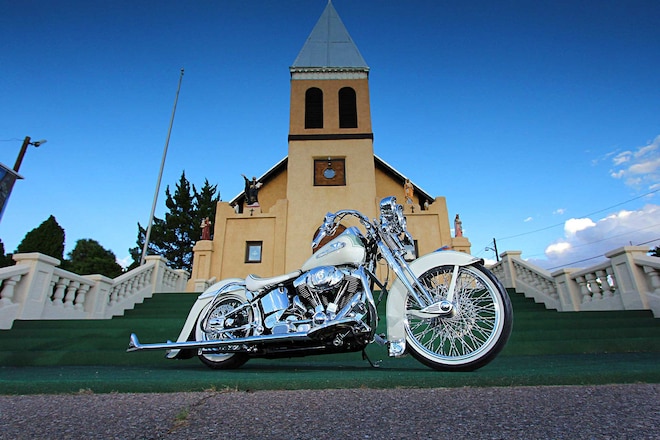 As a kid Chris Florez was enamored with lowrider bikes and would often see a kid in his neighborhood with one in particular he liked, a vintage Schwinn. One day he saw it sitting on the side of the house; he eventually bought the frame to it and sold newspapers every day after school to buy the additional parts for it he needed. Chris still has that bike and hung onto it as a symbol of what it took to build it out the way he wanted it. Fast-forward many years later and that same steadfast work ethic hasn’t changed, but the mode of transportation has sure become a bit bigger and louder.

Chris went to go pick up this 2002 Heritage Springer for his friend Octavio, but his friend became ill and couldn’t finish it. The bike sat for a while but eventually Chris decided to buy it from him and start working on it. First thing to do was get on the bodywork, which meant having his friend Carlos Serna stretch the rear fender 9 inches and front about 7. When Chris bought the bike it had stretched tanks, but he decided to go back to the original tanks. All the rivets and lights were shaved off. The handlebars were also stretched and the swing arm chromed.

The headlight housings, visors, and parts of the Evo motor were engraved by Krazy Kutting. The motor itself was punched out to 93 ci with dual Samson headers pumping fumes out the extended fishtail exhaust, sporting some Kuryakyn dress-up parts. Solid struts were built for the rear to make it go as low as possible with progressive shocks added. It sits on 80-spoke cross-lace twisted American wire wheels. It’s all shod in Fiat green and beige white. The leather seat is 100 percent custom with stainless steel inlays and done by Jamie at 3 Angels Upholstery. The pinstriping and paint flow through the seat to the rear fender.

As Chris puts it, the whole thing was built for the barrio by the barrio. He wasn’t interested in building it to show or for anyone else. Just like the Schwinn he built up with his paper route money, it was done with a vision for what he wanted and the hard work that it took to bring about the finished product. Now that Octavio is on the road to recovery, and the bike truly belongs to both of them, we’re wondering how long it’ll be before one of them decides to start a new project so they can both ride together.