Newsletter
Sign Up today for our FREE Newsletter and get the latest articles and news delivered right to your inbox.
Home » 1999 Harley-Davidson Road King – A Trip Down Memory Lane 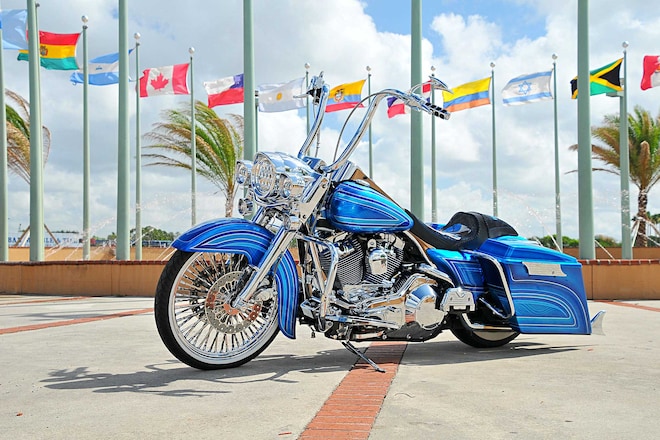 Jeremy Williams’s passion for lowriding can be traced back to when he was just 4 years old. “I remember growing up with toy cars,” Jeremy tells LRM. “If the wheels didn’t tuck, I would customize them until they did.” And it was that same passion that he carried into adulthood when he first started driving and wound up joining a car club called Looney Tunes.

Once he hit adulthood and purchased his first home, he began looking at big-boy toys and his focus turned to motorcycles—specifically custom bikes. During his search he found a bone-stock 1999 Harley-Davidson Road King online and instantly made the purchase. Accustomed to never leaving anything stock, Jeremy began his new transition by bringing the bike to Motorcycle Madness in Dunn, North Carolina.

He came right out of the box, adding a set of drop bags, chrome lower forks, and 16-inch Carlini gangster apes. The next step was dressing up everything he could in chrome and adding the custom wheels. From there, he began going over ideas for more custom additions to the Harley and that’s when he met with good friend Jerry. The two met for lunch and went over ideas, bouncing options off each other. The very next week Jerry and some friends went for a ride. Tragically someone turned in front of him and he didn’t survive the crash.

Still ailing over the loss of his friend, Jeremy decided that he would design and rebuild his bike in Jerry’s memory using the ideas that they had previously discussed. Danny D. and L.A. Baggers were brought in to design the Candy Blue paint along with the masterful airbrush, pinstripe, and leafing. The motor was then torn down and upgraded to a 95ci. To help bring the bike down, air ride was added to the Harley to give it a lower stance, followed by a custom seat that was custom tooled and designed by The Seat Guy.

“Blue Diamond” began as a simple weekend toy for Jeremy, but now that it’s done it’s become a sentimental piece of art, which was designed and created to honor the memory and ideas of his very good friend, Jerry. And while Jerry is no longer around, Jeremy knows that he’s looking over him with pride and saying “I told you it would look badass!” In closing, Jeremy wishes to thank Danny D., L.A. Baggers, Motorcycle Madness, William Strickland, Gary Macon, Billy Wallace, The Seat Guy, Victor Lopez, Juan Gonzalez, and Diamond Heads.

2012 Harley Davidson That Kicks a Lot of Softail