Newsletter
Sign Up today for our FREE Newsletter and get the latest articles and news delivered right to your inbox.
Home » 1999 Harley-Davidson Heritage Softail – Ride of Passage 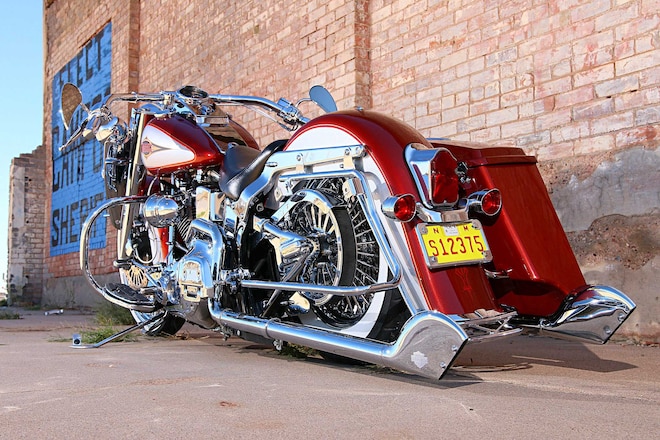 For many of us the love of lowriders began with our fathers. Those early experiences going to cars shows surely indoctrinated us into a lifestyle that’s still with us today and one that’ll likely rub off on our own kids. What better way to honor the influence Dad had on your hobbies than to continue it with your own? Joseph Rodriguez was weaned on the scene early on, and after graduating from lowrider bicycles to a few Cutlasses, he’s now the proud owner of a hog just like his old man.

When Joseph was in the market to find a Harley, he came across this 1999 Heritage Softail on Craigslist. Since it was in good shape, he dropped the coin it took to make it his own. Then came the task of dropping it down. With the addition of some extended saddlebags Joseph also added a custom air-ride setup for the rear. A progressive drop was added up front. Bobby at Custom Colors in Roswell, New Mexico, stretched and lowered the rear fender. He also painted the necessary areas in Aztec Orange and Diamond Ice Silver to match the original shade. The image of a razor was added to the original Evolution engine’s air cleaner to signify Joseph’s trade as a barber, along with some mild pinstriping.

The bike rides on Fat Daddy Mammoth 52-spoke wheels wrapped in Avon Cobra whitewalls. The rear sports a Rockford Fosgate amp and 6x9s with cone tweeters. A Le Para seat and cholo exhaust, along with a bit of brightwork from Electroplating in El Paso, Texas, was added to complete the look. We say “complete” with only partial honesty, as Joseph still plans to add little things here and there as time goes on. As we all know with any build, you never really finish one—you just start on another.

Some things don’t need to be overdone, and this bike is one of them. This is one of those hogs that had all the right contours and came out of the factory looking sharp, so no heavy customizing was really needed. We’re sure Joseph and his pops never miss a chance for bonding opportunities out on the open roads of New Mexico. It pays to have a dad like that, and if your own kids are embarrassed in front of their friends that you’re passionate about lowriders, tell them to be glad you’re not one of those parents driving a smart car. They’ll surely thank you later.