Newsletter
Sign Up today for our FREE Newsletter and get the latest articles and news delivered right to your inbox.
Home » 1979 Harley Davidson Shovelhead – Golden Eagle 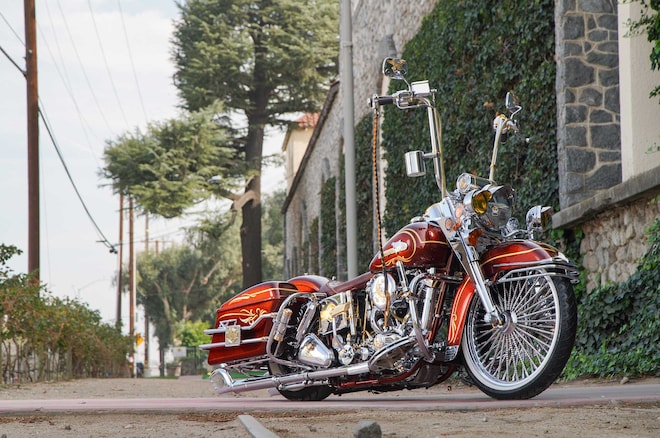 It all started with a passion for lowriders and competition. Abel Macias always looked for ways to get the upper hand against his older brother. If he brought home a new lowrider to toy with, Abel would rush at the opportunity to buy one for himself. After a few years of collecting classic hotrods, Abel’s competitive streak drove him a different direction.

While at work, Abel’s boss took every opportunity to show off his impressive collection of custom motorcycles. Although Abel was more of a lowrider type of guy, he had spoken about the possibility of owning his own bike with his brother on different occasions. One day, Abel felt the strong urge to break the pattern, so he purchased his own project bike as a challenge to outdo his boss.

Abel’s competitive streak guided his creativity throughout the build of his 1979 Harley Davidson Shovelhead. As a kid, Abel was a devoted fan of Discovery Channel’s ‘Biker Build-off’ show. He was specifically inspired by Indian Larry’s style. It was classic, cool and captivating. Abel designed his bike with the purpose to outshine the rest by researching Indian Larry’s bike builds. The bike was dipped in an eye-catching metallic brown lined with glistening gold pinstripes. It was fitted with monkey hangers and featured custom chrome fixtures. Abel took his time with the build and luckily, waited for the perfect opportunity to ride the bike for the first time.

Abel’s boss hosted a motorcycle charity event at work. It was time to show off his hard work and it paid off. Abel’s bike beat the rest and he took home first place. A short time later, Abel also took home first place at the Arizona Super Show. Abel credits his success to his original passion for lowriders.