Newsletter
Sign Up today for our FREE Newsletter and get the latest articles and news delivered right to your inbox.
Home » 1975 Harley Davidson Shovelhead – Full Show Custom 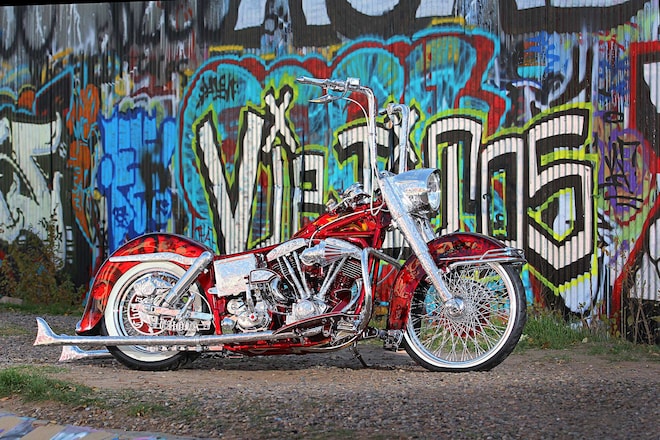 Chris Florez is no stranger to the custom car and bike scene. He started off like so many of us at a young age building lowrider bicycles. Now he is building full show custom motorcycles like the one you see here. As president of Viejitos Vicleros Nuevo Mexico he wanted something that would showcase what he and his club were all about.

Chris purchased this 1975 Shovelhead a few years back and rode it around for a few months but he wasn’t content on leaving it the way it was. He called up his good friend Mike Janas and the two of them took the bike apart. They went through the motor, freshened it up a little, and sent all the tins off to Carlos Serna. Serna sprayed a Candy Apple Red with ghost flames on it. Chris road the bike for about a year and then took it to the Denver lowrider show where he met the guys at Krazy Kutting and was in awe of their work. So he had them come over and look at the bike and go over some of his ideas. Once he returned home he started dismantling the bike, but this time he took it completely apart. If he was going to take the bike to the next level, every nut and bolt would have to get redone. Chris spent a lot of time designing the bike before he finally settled on a layout. He wanted it to flow and have one consistent theme. He looked over all the parts and divided up what would get painted, powdercoated, chromed, engraved, or all the above. The first thing was to send out the bottom end to Maliki to rebuild. The heads, jugs, lower cases, along with the chain and display were sent with a few other parts to powdercoating. Once the parts were cured he drove them to Las Vegas to Diamond Heads to have them diamond cut. It seemed like never-ending packages were sent out to Krazy Kutting to get engraved and chromed. While he was waiting on them to engrave all the parts, he sent the fenders, tank, and frame to Danny Bally. Bally and his guys smoothed the tank, stretched the fenders, installed a custom taillight, and also a TV in the rear fender before spraying Candy Apple Red on all of it. Once the paint dried he sent them to David Lasoya who prepped the paint for some airbrushing. Bally covered almost every square inch of the frame and tins with Murals of cholas and Spanish-themed art.

Chris’ vision was finally coming together. Once he got the frame back to his shop, it was time for Chris to start the tedious task of putting it all together. He set a deadline of the Tejano Super Show, which was only a few weeks away. Every spare minute he wasn’t working his day job he spent it putting the bike together. He installed a set of twisted cross-laced spoke wheels from American Wire Wheel. As the parts started arriving, Chris was getting more and more excited. The deadline to head to Texas for the show was here but the bike wasn’t completed yet. Chris put the bike in a trailer and headed south. The crew at Krazy Kutting brought the rest of his parts to the show. The last piece of the puzzle was the one-off custom upholstered seat from Jaime at 3 Angels. At the bike’s first show he took home First Place in full customs. The bike has been taking First Place awards ever since. Chris built the bike for his love of Harleys. We hope that he will show us his love on more projects soon.