Newsletter
Sign Up today for our FREE Newsletter and get the latest articles and news delivered right to your inbox.
Home » Travis Bielert’s Harley-Davidson Softail DeLuxe 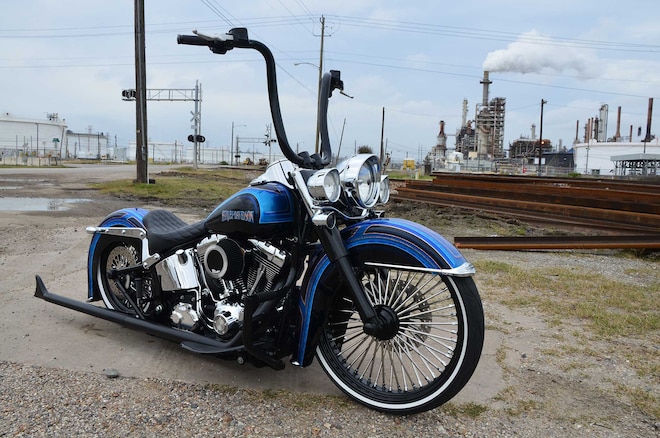 Travis Bielert has been into custom cars for as long as he can remember. Growing up he loved lowriders and Harleys so when it came time to build a Harley it was only natural that he would build it with a Cali Vicla style. Having previously owned an old-school shovelhead bobber he found himself wanting something more comfortable and dependable for those long cruises, so it was off to the Harley dealer for a brand-new Harley Softail DeLuxe.

For most people in the Harley world chrome is king, but Travis wanted to stand out from the crowd and went against the norm and came up with a blacked-out theme. With a vision in mind, the seven-month journey from average cruiser to major head turner began. The first step toward giving the bike a lowrider style was building a full front and back air suspension. Rather than ordering an aftermarket fender and tank Travis went to work on putting his own custom touch on the stock parts. Countless hours were spent stretching, molding, and smoothing every piece on the bike. Both front and rear fenders were stretched and molded to add to the lowrider look he wanted.

Having done virtually all the work up to this point with his own hands in his garage Travis was now faced with the one aspect he needed help with: paint. After asking friends for recommendations and talking to several different painters, Travis decided to load his tins on a pallet and ship them to a painter across the country in California he discovered through Instagram. With a few instructions on a basic color scheme, painter Jake Blancas was given free reign and set free to get creative. Final assembly brought about a series of challenges, including where to mount the compressor for the air ride, a custom saddlebag solved that problem. After countless hours over a very fast-paced, seven-month build, Travis’ only regret is that he didn’t have another bike to ride while this masterpiece was built.