Newsletter
Sign Up today for our FREE Newsletter and get the latest articles and news delivered right to your inbox.
Home » 2012 Harley Davidson Road Glide – The Price of Dreams 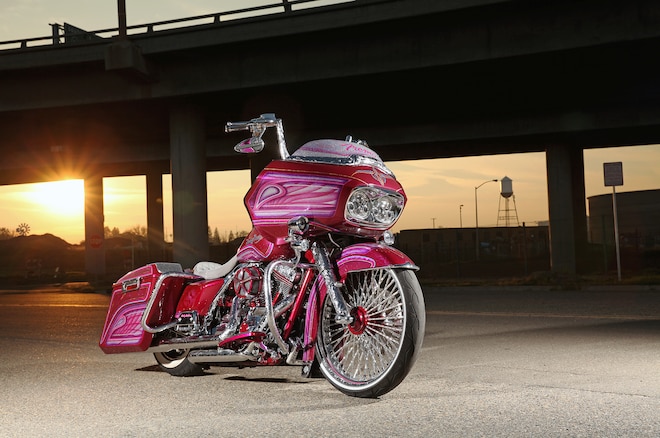 After a year of turbulence, the smoke has finally settled, the family is good, and the bike of Ernie Cruz III is sitting pretty in pink. But ask him if he’d do anything different and he’d simply say, “No, I’m really happy with this build.”

When Ernie first purchased his Harley Davidson Road Glide new in 2012, he had a lot of plans, and fortunately for him he was able to execute his ideas into rolling art. But ask him how easy it was to build his Harley and he’ll have a barrage of stories about a hell bent wife who was getting tired of the loud music, the buying of parts, and the countless hours he would spend building the bike – sound familiar? Well, fast-forward to present day, and everything is kosher in the Cruz household, and we already know a happy wife equals a happy life.

At first glance, the bike is mesmerizing. With a bold mix of magenta color tones, the bike sports a brilliant hue of pantones, which were painted and patterned to perfection. Considered by many color experts to be a color to represent change and transformation, the magenta pantones found on this bike are definitely indicative of the transformation, which took place. With just about every nut and bolt removed, the Harley’s engine casing has plenty of chrome and engraving, the stance is perfect and the oversized front wheel gives this Harley the curb appeal of a big boy toy.

In his attempt to build a Harley that would easily sit besides the best, he is proud to have placed at every show he has entered and has even more plans for the bike. Of course, this is something that only a true enthusiast would ever understand, because in our wolrd there is really no such thing as a finished project – only the next project.

Engine: Custom gauges and Carlini handlebars before Billy and Black Rob of Ride Motors in Fresno, CA worked on the Twin Cam 103 engine. Gino of Fresno, CA engraved the motor whileMoreno’s did the chrome and polishing. A Kuryakyn air filter was added to finish the engines look.

Interior: The seat was covered in light grey suede with a diamond pattern.

Wheels/Tires: Sinster 23×3.5-inch diamondback spokes wheels in the front and 16×5-inch in the rear wrapped in Vee Rubber tires.