Newsletter
Sign Up today for our FREE Newsletter and get the latest articles and news delivered right to your inbox.
Home » Scooter Trash – 1995 Harley-Davidson Softail 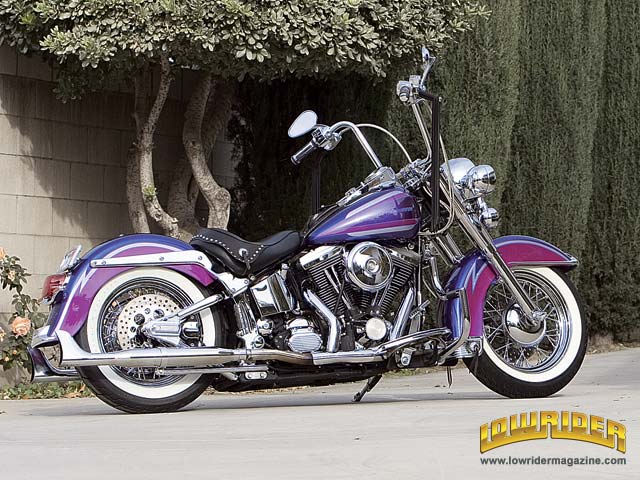 It’s often said in the motorcycle community that if you haven’t gone down, you will. October 5, 2002 proved to be that fateful day for Marilyn Rodriguez of Ontario, California. While riding with some friends, her ’95 Harley-Davidson Heritage Softail was rear-ended. Luckily, Marilyn sustained only minor injuries and she was soon ready to jump back on the “iron horse.”

Marilyn enlisted the help of Luis Capilla of Eternal Customs in Ontario to get the bike back together and add some flash to it. Luis laid down a custom mix of candy magentas and silver pearl with some marbleizing for a tasty candy color scheme. Mike Lamberson of Ontario pinstriped the bike and Victor at Best Polishing and Chrome in Pomona, California, made all things shiny that way. A set of diamond-cut head and running lamps, baby ape hanger handlebars and custom stainless steel twisted spokes were added for some more flash. The powerplant on was more than adequate for cruising, but a set of fish-tail pipes were added for Marilyn’s visual and aural pleasure.

If you’re thinking that this is a show bike that gets dragged around, you might wanna check the contents of that cigarette that you’re smoking. Marilyn is about as hardcore as they come and she hits about every bike run that she hears about and then some. It’s gotten to the point that her painter tells her not to ride the bike so much because it’s dinging the paint. Marilyn just laughs, points at the back fender and rides off into the sunset with the wind in her hair and wide grin on her face.