Newsletter
Sign Up today for our FREE Newsletter and get the latest articles and news delivered right to your inbox.
Home » Harley Davidsons – Double Trouble 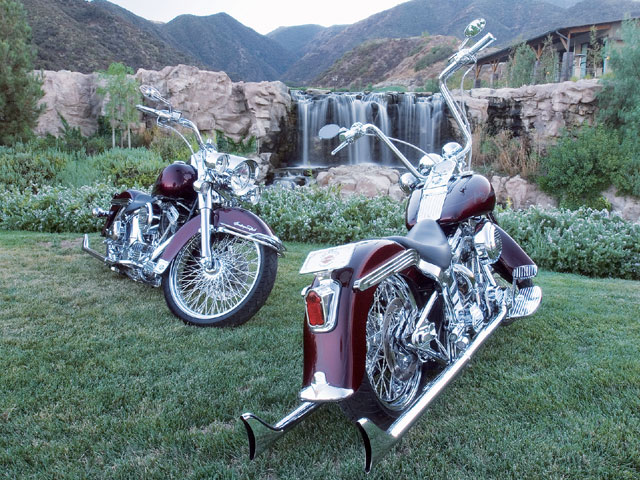 How many 13-year-old kids can say that they have a genuine Harley-Davidson? How many four-year-olds can make that claim? Up until a few weeks ago, we’d have said none, but on meeting Jimmy Monugian, Jr. AKA “Jimmy Boy” and Sam “Bubba” Monugian of Norco, California, we stand corrected. “Double Trouble” is the brainchild of Jimmy Monugian, Sr., who was in the business of building Harleys a while back, but now has taken up just doing it for his two sons. Fifteen years ago or so, Jimmy, Sr. was building gangster-style bikes with plenty of chrome and worked motors. Most importantly, they rolled low, as he made sure that the tailpipes were dragging on the ground.

Jimmy Boy’s 2000 Harley-Davidson Heritage Softtail with its 96-cubic-inch motor went through a few mods to bring it to its current configuration. Larry’s Custom Painting in Santa Fe Springs, California, handled the burgundy candy paint job with plenty of striping that makes for a tasty look. Custom lower fork legs, CCI low-glide frame and airbag system bring the bike down to a level that Jimmy Boy can relate to, getting the pipes right down to the ground. The front wheel is a 21-inch 80-spoke Landmark while an 18-inch 80-spoke Landmark wheel holds up the rear.

Bubba’s bike is a 2003 Harley-Davidson Heritage Springer featuring a 96-cubic-inch motor with plenty of chrome and a matching paint job. Bubba’s ride also features a CCI frame and airbag system. The front wheel is a 21-inch 40-spoke Landmark with an 18-inch 40-spoke 18 Landmark found in the rear. You know that mom always has the last word and right now she says that any other mods will have to wait.

As it stands, these bikes have taken many best of show awards at the numerous shows that they’ve been entered and they are are the pride and joy of the kids. As if only their own Harleys aren’t enough, Jimmy is currently building Jimmy Boy a ’64 Chevy Impala convertible with Bubba getting a ’37 Chevy Master Deluxe. Talk about spoiling your kids, these two are certainly double trouble when it comes to automotive toys bringing big game and playing hardcore like grown men. Special thanks go out to Chubbs at American Cycles and Hyvon Choppers in Whittier, California, for helping out on the Harley hookup.