Newsletter
Sign Up today for our FREE Newsletter and get the latest articles and news delivered right to your inbox.
Home » Jim Jurado’s First Love—A 1951 Chevy Deluxe 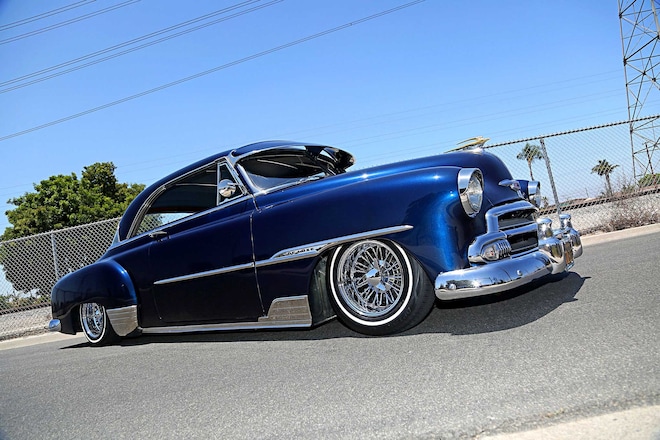 Even after having relationships with a 1958, 1960, and 1964 Impala there was nothing that could keep Jim’s mind from his first true love. At one point he even took a stab at a 1958 pickup truck but the semi-retired heavy machinery operator out of Anaheim, California, couldn’t shake the feeling, so he decided to look for another 1951.

His online search began three years ago and that’s when he stumbled across a 1951 DeLuxe for only $3,500. The car was complete and running, but instead of having to trek across hundreds of miles, the best part of the deal was that the car was only 8 miles away. Jim’s original idea was to build an all-original car just like the one he had previously owned but this time around he wanted a bit more power and reliability, so he pulled the factory 216 engine and along with a few friends dropped in a hefty 5.3 LS. Once dialed in, he took it to J&R Upholstery where they performed the bodywork, paint, and upholstery, and for height adjustment Anaheim Rod and Custom installed the air suspension while Zeus hammered on a set of American Parts wire wheels.

With the bomb complete, Jim is enjoying the fruit of his labor. As he basks in the memories of a love affair rekindled, he still wants more. But as he debates between an A/C or a supercharger, Jim admits that the weather in sunny SoCal is pretty good so it looks like his first love may get an HP infusion that is sure to give this bomb a little more firing power.

Engine
Vortec 5.3 with 4L60 transmission and an aluminum radiator