Newsletter
Sign Up today for our FREE Newsletter and get the latest articles and news delivered right to your inbox.
Home » “VanSlam” and “Disco Van”: GNRS 2020 Spotlight 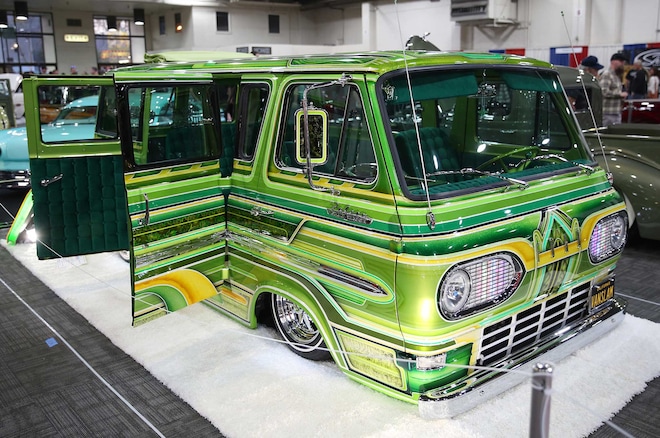 When most people think of vans, they rarely think that they can be cool. Considering that vans were created specifically for hauling people and goods from point A to point B, it is kind of hard to look at something that was created for such a mundane purpose and see it as anything else other than bland and boring. However, every once in a while you’ll see something that will shatter all stereotypes.

At the 2019 Grand National Show, we saw an example of a cool van when we came across a blue 1989 Chevy Van 10 that reminded us of the van that Cheech and Chong drove in Cheech and Chong’s Next Movie. We were a little unsure if we’d ever come across another van that could capture our attention as strongly as that van—that is until a year later at the 2020 Grand National Roadster Show where we saw not one but two jaw-dropping family haulers—a blue Chevy Van 20 nicknamed “Disco Van” outside of the Suede Palace and a green 1967 Ford Econoline Falcon Club Wagon dubbed “Vanslam” sitting slammed on a white rug inside one of the halls.

Disco Van did not have an information card on display next to it so we unfortunately don’t have that much information on it other than what we were able to get from looking at it. Take one look at Disco Van and you’ll instantly be mesmerized by all the custom patterns it’s wearing; its real allure, however, wasn’t on the outside but on the inside. Take a peek through the side door which had been converted to be a swing out canopy and you’ll see a sight straight out of a scene from a rerun of That ‘70s Show: woodgrain walls, swiveling front seats, shag carpeting, and to top it all off a lava lamp and an 8-Track stereo system that looked like it was taken straight out of your grandparents’ basement rumpus room.

Unlike it’s brother, VanSlam did have an information card next to it so we were able to get a little more information about it. Featuring a paintjob by Tyler Pullen of TP Custom Chop Shop with chrome work by Best Chrome of San Martin. Inside of VanSlam is an interior by Acme Auto Interior which consists of pillow-top upholstered seats with matching cloth interior panels.

A quick look online suggests that Disco Van and VanSlam are both owned by Gary Villeggiante (@cadbomb) or at the very least are both members of Gary’s car club, Sin Nombre’s stable of cars. If Gary’s name seems familiar it should be. Gary is the owner of #project53, a badass LS-swapped 1953 Bel Air ragtop that we had the honor of featuring after we came across some videos of it doing donuts on social media.

Both of these vans are worthy of their nicknames and seeing them on display at the Grand National Roadster Show makes us wonder what Gary Villeggiante and other members of Sin Nombre have up their sleeves for the future.