Newsletter
Sign Up today for our FREE Newsletter and get the latest articles and news delivered right to your inbox.
Home » USO King Kita Lealao’s 1981 Cadillac Coupe De Ville 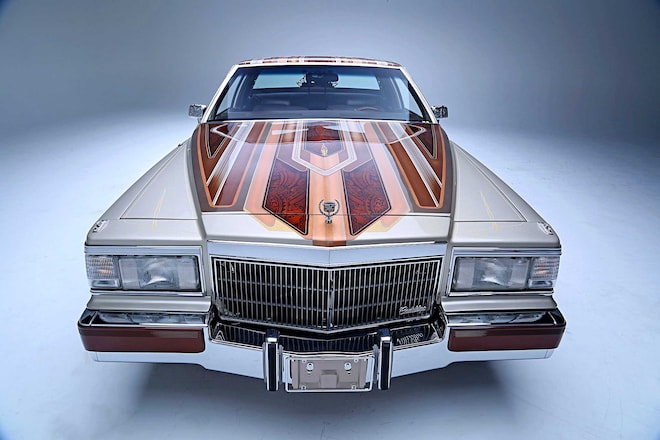 In 1992 a highly respected organization was created. But this was no ordinary gathering of likeminded individuals. This was the start of a brotherhood fueled by passion and an entity that would spark change and become a staple of the lowrider community. This was the start of USO—a car club that has since become known as UCE.

With strong communal values, the club has become a powerhouse with global influence. As one of the biggest lowrider clubs in recorded history they pride themselves on being an expansive family unit that looks more into the driver than the car itself. With chapters in SoCal, NorCal, Miami, Guam, and Stockholm (just to mention a few) the club has since become a group of influencers and tastemakers known for their high-energy presence.

Founded by Kita Lealao in Carson, California, the club receives its fair share of awards. They’ve been at it so long that lowrider historians would probably remember them receiving Car Club of the Year back in 1997.

Now when it comes to Kita, he’s become a household name and a familiar face. In fact, he may be one of the more notable faces in the industry. With his distinct tattoos and stern face (that can crack the friendliest smile in a split second), he’s a Cadillac aficionado and lowrider enthusiast who takes a specific liking to fifth- and sixth-generation Cadillacs.

A Caddy owner himself, Kita always took pride in his ride, but after one eventful night it was gone. When an elderly lady plowed into his Cadillac, it was a wrap. The car was totaled and it was time to start over again, except this time around his club decided to jump the gun. In 2013 his fellow club members pitched in to get him a 1981 coupe. With intentions to get it started off right, it was immediately shipped off to the team at Katoic who fully disassembled the car. The frame was sent out to be sandblasted, reinforced, and candy painted while a 350 engine and transmission was donated to the cause. Once reassembled, it was then sent off to Triggerman who laid a custom champagne mix with root beer candy in tribal-style patterns. Dekay then stripped it while Joel Anthony redid the interior. It took the Canada crew three years to finish the build and they were able to break it out at last year’s Las Vegas Super Show—perfect timing, to say the least, since the club was also celebrating its 25th anniversary.

All the parts and hard work that went into the car was done out of the love they all have for Kita. To have that many people step in and give up their time and money speaks volumes about the type of person Kita is. His Polynesian roots made Kita a natural caring and loving man and through his club he is able to spread that love worldwide while inspiring many.