Newsletter
Sign Up today for our FREE Newsletter and get the latest articles and news delivered right to your inbox.
Home » A Treasured Build of a 1983 Chevy Monte Carlo 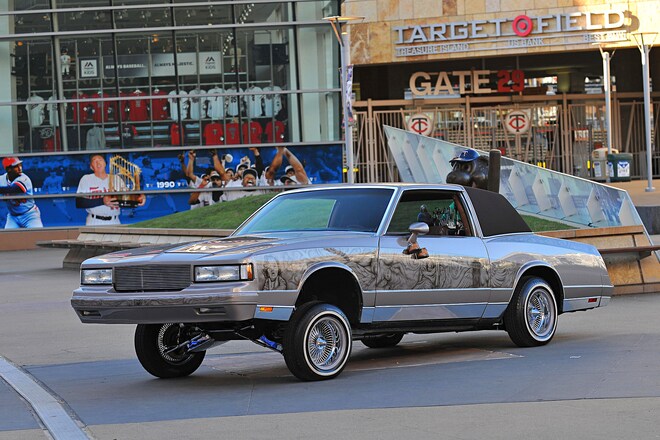 The frailty of life is what drives us to go above and beyond expectation. With each ticking second we’re literally exhausting our life’s reserve and in just the few seconds it took to write that first sentence I’ve literally gotten that much older. And while most of us plan out our lives as if we’re going to live well into our nineties, there are always those chance instances that remind us just how short and unexpected life can be. Thus is the case for Scott Schaefer and his girlfriend.

What started off like any other day turned into every parent’s nightmare. It all started when the avid Minnesota Twins fans wanted to bring their son, Tyson—their energetic and healthy 9-month-old son—to one of the games. As they prepared for the day they packed up his bags, took the road trip to watch the Twins play at Target Field, and, in all, it was an incredible time. The following morning, Tyson woke up bright and early and was seen playing with his toys and acting like any child would. A few hours later, it was time for Tyson to take his morning nap. “I put him in his crib and let him sleep for about 15 minutes, “ Scott tells LRM as he described the situation. Yet little did Scott know that would be the last time he would see his son alive. “It happened out of nowhere,” Scott says. You see, shortly after putting his beloved son to sleep, Tyson died in his crib from Sudden Infant Death Syndrome (SIDS), a condition by which a baby who seems healthy dies during sleep.

A horrifying event, to say the least, Tyson’s death was a hardship that would take its toll on the family. Looking for relief, and wanting to create something in memory of their son, the duo decided to pay tribute to Tyson by creating a rolling memorial in his honor. To do so, Scott melded the love for his family with his passion for lowriding and created a ride with huge sentimental value and one that would help share Tyson’s story while giving him an eternal voice.

To make that reality come to fruition, Scott used a 1983 Chevy Monte Carlo he had purchased from his club brother Shane a few years back. It had been sitting since the time of purchase and now was the time to dust it off. Prior to this, Scott had never performed a frame-off lowrider build. With a bit of anxiety, Scott knew this time around it was going to be a special build so he went for broke and jumped to it. The Monte was brought to his club brother Jake Oates’ father’s garage for the three-month build, and during that build he had great friends like Jake, Tony Bahner, Mike Moen, Scott Mather, Jessica Peterson, and Lin Anderson lend a helping hand.

Tanner from Hardcore Paint in Hastings, Minnesota, came in and airbrushed images of Tyson all throughout the Chevy and included in the imagery were photos of his stepson and daughter, along with things he enjoys, like the Minnesota Twins field on the trunk and angels along the side. The once-abandoned project car is now a show-worthy piece that serves as a constant reminder of how special Tyson is to the family. It is also a reminder that we need to cherish the time we are granted on this great earth but it also serves as a monument to a young child whose story will help raise awareness about SIDS while giving him an eternal voice and a memorial by which we can all remember him by.

Body/Paint
1987 LS front clip, bodywork done by Jacob Oates and Tony Bahner, Champagne with chrome metallic by Mike Wiech, airbrushing and murals by Tanner with Hardcore Paint in Hastings, MN, underbody and frame airbrushing by Lin Anderson with No Limit Design in Minneapolis, MN, ragtop and boxed in windows by Precision Upholstery in Brooklyn Park, MN

Interior
Fiberglass dashboard done by Sub Zero in Minneapolis, suede and vinyl with piping done by Bigg Sean at Top Stitch Up Upholstery in Minneapolis

Lowrider Garage takes you on a tour of Daniels Creations—a multi-task, one-stop shop where everything happens