Newsletter
Sign Up today for our FREE Newsletter and get the latest articles and news delivered right to your inbox.
Home » Top 5 Chevy Monte Carlo Lowriders of All Time 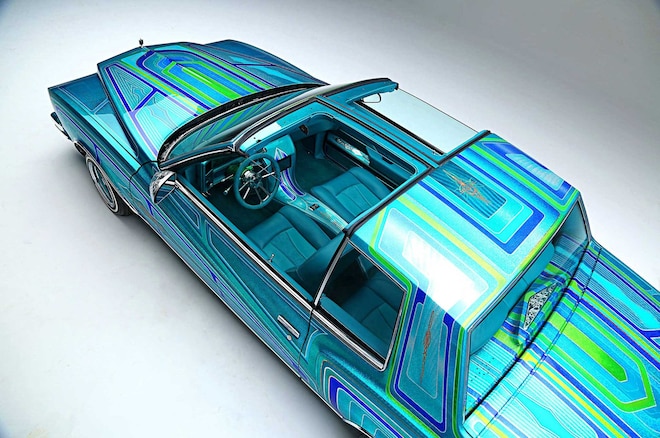 For 6 generations, the Chevy Monte Carlo, through all of its drastic changes spanned a 37-year production run that resulted in some incredibly well-built lowriders along the way. And while the Monte doesn’t carry the same sized fan base as the Impala family, those that are dedicated to the 2-door coupe are incredibly loyal.

As with any of our recent Top 5 and 10 lists, we let the metrics make the tough decision of choosing which vehicles make the cut. The stats are based solely on the number of times a story has been clicked on and read by you, the fans. The final 5 stretch from the car’s initial generation all the way up to its 4th, which ran deep into the 1980s. Starting with the most popular Lowrider Magazine Monte Carlo feature, here are the top 5 features of all time:

When you’ve earned a Lowrider of the Year award like Orlando Ceballos did with his Cadillac “Game Over” build, people are going to be asking “what’s next?” This often leads to rumors spreading and that’s exactly what Ceballos named his ’79 Monte – a Lowrider Magazine cover car and runaway winner of the all-time most popular Monte Carlo features with over 20,000 additional story views separating himself from the competition.

One glance will tell you this build is on a whole other level, with incredible detail and an undeniable color combo that will stand the test of time. Get through the intricate lime green, cobalt blue and blue pearl patterns and you’ll note the precision engraved pieces that include the mirrors, door handles and hydraulic components. California Upholstery worked their magic on the interior, matching many of the exterior colors for a seamless look. This is the type of build that will surprise you with hidden details that you’ll realize you missed on your first look.

Dino Acosta credits his brother’s car for pulling him into the lowrider lifestyle and for his ’72 Monte Carlo, he wanted to pay homage to the ’70s and ’80s-era builds that ignited his passion for custom cars. What started as a slightly beat up fixer-upper was promptly torn down and repaired before being sprayed PPG Sandstone Brown with a touch of micro-flake. Anything that could be unbolted from the chassis was chrome plated or painted.

The trunk set up, a result of a team effort with his fellow car club members, was designed in a way that brings you right back to that original ’70s style. What began with a $2,200, slightly beat up chassis was transformed into a priceless time machine to the early days of lowriding.

This G-body’s nickname comes from the James Brown song and if anyone has “paid the cost to be the boss,” it’s Andrew Cisneros. He’d traded his high school Chevy Blazer for this car and after eventually revamping the interior, painting it champagne with a chromed under-carriage and hydro set up, he ran into his high school counselor, Harvey Reyes (Lowrider Magazine hall of famer). Harvey would go on to introduce him to Carnales Unidos car club and in 2015, Andrew began to completely rework the entire car.

That same year, his father was diagnosed with cancer and he spent every day in the hospital until his father was released. At the same time, his wife fell ill, and he was right back in the hospital. However, her eventual recovery helped motivate him to get back on the build and complete it. The custom candies and patterns force you to take a closer look where you’ll find endless details and once you pop the trunk, you realize just how intricate this creation really is. Passion and compassion go hand-in-hand with this inspirational feature story.

After the tragic loss of his son, Scott Schaefer set out to create a rolling memorial based on this ’83 Monte Carlo that he’d purchased from a fellow club member years prior that hadn’t been touched since then. Jumping into his first official frame-off lowrider build, Scott took no shortcuts.

Images of baby Tyson were airbrushed throughout the build along with images of Scott’s stepson and stepdaughter. An ’87 LS front clip was sourced, and the entire car covered in Champagne with chrome metallic touches that give the build a truly classic look, especially with the boxed in windows and rag top treatment.

It’s the sort of build that carries unimaginable weight that no parent should ever have to endure, but one that no doubt helps Tyson’s parents cope with the loss and keep their son’s spirit alive.

Ask Juan Venegas why he built this car and he’ll tell you, without hesitation, “I wanted to kill the competition.” Juan’s story is one of rising up the ranks the old school way: though hard work and patience. He started with a lowrider bike build, traded up to a 1982 Regal, then flipped a number of cars until he finally found this Monte. The candy red paint and pink pinstriping with gold leaf accents will draw you in, while the dash, door jambs and trunk area keep you there with a series of hypnotic, one-off murals.

Anodized wheels and square dumps match the car’s color while inside, peanut butter upholstery provides some stark contrast, with painted dash panels and murals helping to tie it all together.