Newsletter
Sign Up today for our FREE Newsletter and get the latest articles and news delivered right to your inbox.
Home » 1964 Chevy Impala Built By A Lowriding Lawyer Who Wouldn’t Take No For An Answer 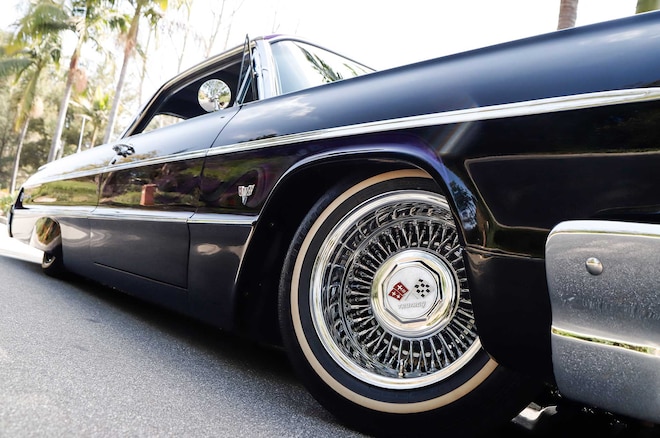 The 1964 Chevy Impala remains one of the most popular platforms for lowriding. It’s considered by many to be the benchmark of the lifestyle, but for Tomas Requejo, his Impala is a source of pride, as his ride pays homage to his creativity and his struggle, as well as his achievements.

Now it’s been said that adults crush more children’s dreams than fear itself, and for Tomas, it’s a situation he knows all too well. At an early age, he had dreams of attending UCLA, but his outspoken visualization came to a screeching halt when his counselor (the adult that’s supposed to encourage, guide and motivate) told him to be “more realistic” about his goals. Initially, that statement took a toll on his ambitions, and while he may have been down, it wasn’t for long. Thanks to his grandmother, who always pushed the family to become educated, he buried his head in the books, developed the discipline and fortitude to excel and after years of major effort, graduated from UCLA with a degree in law. From that point on, Tomas became heavily involved in politics and championed those who fought for their community&dash;even protesting alongside Cesar Chavez at one of his famous marches.

Years after starting his own practice, Tomas was ready to get started on the ’64 and it all began with the paint. At first glance, one could easily spot the now custom black and purple flaked out roof, but deeper inspection reveals the addition of purple and grey ghost patterns done with pearls orchestrated by the artist Funkadelic. To further accentuate his mobile art piece, a set of unique murals were painted by Gabriel Frias while beneath the car rests an assortment of chrome suspension parts powered by square dumps and finalized with a set of Tru Rays.

Aside from his ’64, Tomas also has a ’65 Impala, as well as a ’54 Chevy Bel Air. The crew at Funkadelic painted both masterpieces, with a brilliant blue on the Impala, and the Bel Air flossing a contrasting black and white. The Impala’s stock suspension and 327 engine keep it running, while the Dayton wire wheels keep it fresh to death. On the flipside, Tomas’ Bel Air sports a straight 6, 250 engine, and is fitted with an airbag suspension, and chrome hubcaps.

In the end, this trio is powered by the same outspoken spirit Gabriel himself has become, and when asked about what attracted him to lowriding, Tomas replied, “A lowrider is your individuality, your way of saying, ‘I am here and this is who I am.” It’s that sentiment which speaks volumes about the way he built his ’64 and it shows, as Tomas has spent his entire life defying the status quo and defining his right to self-expression. But among his three lowrider builds, he made sure that the details echoed his spirit of individuality while doubling as a reminder that no one can set limitations on his goals—or for that matter, anyone’s else’s.