Newsletter
Sign Up today for our FREE Newsletter and get the latest articles and news delivered right to your inbox.
Home » This ’75 Impala Glasshouse is Bringing Back the ’70s Flavor 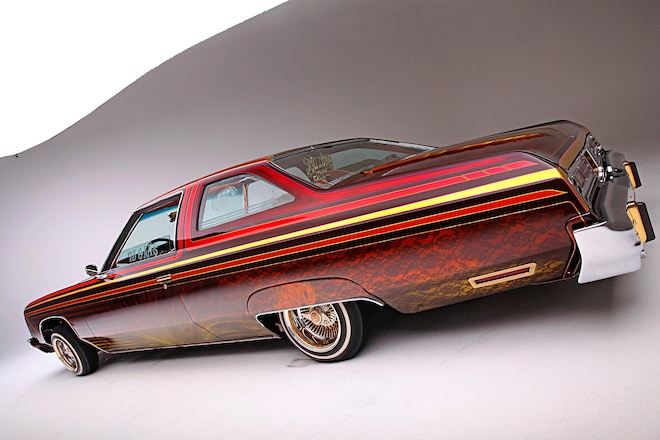 The ’70s was an incredible period of time. Culturally, many historians have said that the ’70s was responsible for shaping much of modern America culturally, but that’s a whole other discussion. Now when you look at the ’70s from a design perspective, it was responsible for delivering some cool nostalgic flavor. From electronics to cars, furniture to art, the ’70s was a period of time that delivered true, unadulterated expression. There was no one worrying about “resale” value or “industry standards” and it was a time when lead-based paints and open expression were encouraged and practiced.

That said Juan Carlos Sosa from the San Fernando Valley wanted to bring back lowrider styling from the ’70s and his platform of expression was a 1975 Impala Glasshouse. “I always wanted a classic car, and I wanted to bring back the styling and paint schemes that were seen in the ’70s,” the Stylistics Car Club member says. He further explains, “My goal was to build a quality ’70s show car because there weren’t enough people showing or building them.”

So how did this project get started? Well, after getting word someone was ready to abandon a Glasshouse project, which was just out of paint, Juan took a trip to inspect the car, and after handing off $6,000 he wound up coming home with a car that both him and his brother would spend the next three years building.

When you look at the massive amounts of chrome, gold plating, and engraving, it becomes clearly evident that this build was truly a labor of love. In addition, he originally had a hard time sourcing parts because of a lack of demand for ’70s car parts, but he was able to connect with Mike Lopez from Glasshouse Connect, who helped him acquire many of the necessary parts.

As with any lowrider build, he said that the most challenging part (aside from finding parts) was to find a painter that was willing to come down and paint the firewall and under belly—but then again that shouldn’t come as a surprise. Painters have long been referred to as the prima donnas of our industry. But then again, what else would you expect, they’re artists and it’s just a part of the process, so it’s a frustrating experience that we’ve just gotten used to.

The deep and illustrious hues found all throughout the car take precedence on this build and it creates a rich shell that houses an equally intricate engine bay. With the hood open, one would be hard pressed to not just sit and stare at all of the attention to detail, and to be honest it would almost seem like a cardinal sin to drive the car. There are layers and layers of chrome, gold, and custom engraving that adorn the engine and those same intricacies extend through the exterior of the car, with patterns flanking the entire car. The hood and trunk are art pieces in and among themselves. They are intricate, perfect in symmetry and while it won’t be everyone’s cup of tea, it sure does deserve the attention and respect it gets. During it’s first unveiling during the 2012 LOWRIDER Super Show, the Impala, which he calls “75Glas” landed a Second Place win and he’ll be the first to admit that this build was a labor of love that drained his pockets more than just a few times.

With a mysterious presence, the car oozes a dark and rich flavor that speaks volumes about craftsmanship. It’s a sympathetic restoration that Juan says he wishes he did as a frame-off restoration on, but it’s a quality build that speaks, breathes, and oozes the rich cultural style of the ’70s.

Congratulations on a mission accomplished and a job well done.

Interior
Zunigas Upholstery in Northridge, CA, used leather and sway to do the upholstery in the Glasshouse. Interior modifications include 1996 Infiniti seats/center console, molded dash, replacing original gauges with Bosch gauges, and handles with Lokar ones.