Newsletter
Sign Up today for our FREE Newsletter and get the latest articles and news delivered right to your inbox.
Home » SEMA’s attention Grabbing ’58 Impala 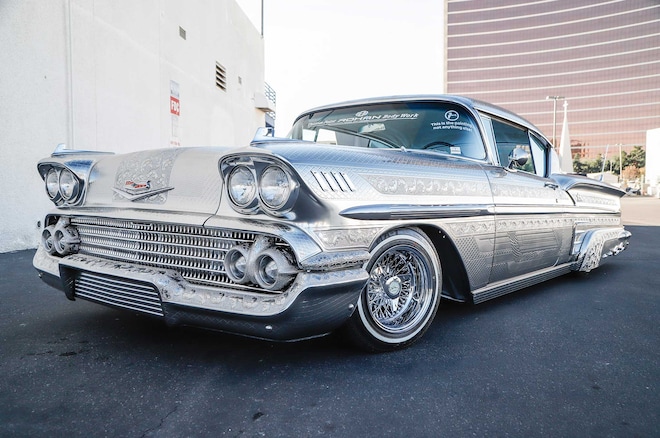 The Japanese word shokunin is defined as “craftsman” or “artisan”, but when you dig deeper into the meaning, you find that it has a more profound concept than the literal description. “Shokunin” not only means having mastered a technical skill, but also having a level of consciousness and sense of responsibility to always do better. “Shokunin” often make a one-of-a-kind product that is highly appreciated for its painfully intricate details.

When Japanese painter, Takahiko Izawa, was first exposed lowriders in high school, he was immediately drawn to the custom paint aspect of these works of art. Scanning through the pages of Lowrider Magazine, he admired the details of the custom paint jobs created in the US. He saw himself aspiring to be among those painters someday. He dedicated himself, tirelessly, into honing and perfecting his skill, until finally he had elevated his craft to unparalleled proportions.

Izawa had been most attracted to the 1958 Chevy Impala. To him, this car was the most “dignified of all,” and he eventually acquired one. But simply owning it wouldn’t be enough. Izawa felt compelled to make this build a rare work-of-art. And so he developed a special paint material, over the course of many years, that “enhanced the Impala’s existence and shined the most.” As president of Rohan Co, Ltd, a prestigious paint manufacturer in Japan, Izawa created a unique 3-D paint material that allowed him to “engrave” the whole body of the Impala, bumper to bumper, making the car brilliantly reflective, almost reminiscent of a full chrome finish.

Documenting his progress on social media, this intricate build garnered attention before it was even presented publicly. Izawa can be seen in time-lapsed video clips, carving, etching and engraving tiny scrolls and grid patterns INTO the paint, as opposed to ONTO the paint, as most traditionally do. After one and a half years of non-stop work and teaming up with Japan’s best auto shops, his dream build was finally complete and ready to show.

Ben, at Auto Taste/Osaka installed the High Camshaft 350 engine and the one-off steel exhaust. An Air Force Suspension with air bags was added by Chris at Kulh Japan Co, Ltd/Nagoya. Izawa finished off this masterpiece with 13″ 7rev. cross spoke Daytons, a one-off metal cruiser skirt, and a fully restored floor.

With so much attention paid to detail in this ’58 Impala, it was no wonder that it quickly became the “must-see” showpiece at the 2018 SEMA show in Las Vegas. Izawa could be seen at any given moment throughout the show receiving admiration and praise for the mastery of his craft on display among the other automotive-industry giants. Rightfully earned, Takahiko Izawa stands apart from any painter before him, as an innovator and master of his skill. After dedicating 25 years of his life to the custom paint industry, he finally feels like he accomplished what he set out to do. A true “shokunin” , in the eyes of most, the standard of custom paint has been irrevocably set higher.