Newsletter
Sign Up today for our FREE Newsletter and get the latest articles and news delivered right to your inbox.
Home » Scott Roberts’ True-To-Form 1954 Mercury Custom 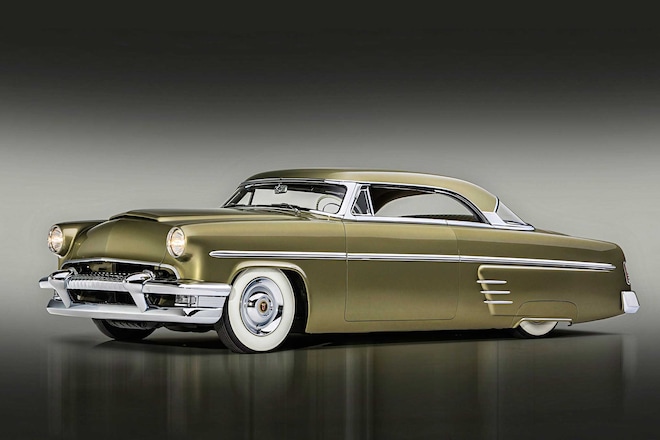 Back in 1935 when Clark Gable came to Pasadena’s Bohman & Schwartz requesting their services in customizing his Rollston-bodied Duesenberg Model JN convertible coupe, do you imagine there was any questioning on behalf of designer Wellington Everett Miller when it came to the 6-foot 1-inch actor wanting the windshield height lowered and laid back? Nope. For Gable, it was about being seen, not the ability to see…this was a custom, one of the earliest recorded forms of such as a matter of fact, and traditionally speaking, function typically takes a hunkered-down back seat to form when it comes to making automotive statements. Why else would anyone ever consider reducing forward visibility, let alone omit any means in which to enter the vehicle via exterior devices or even have the ability to negotiate a speed bump at any speed greater than a half mile per hour? Because practicality is not a word found in the custom dictionary.

Function follows form—often way behind—in the eyes of the custom aficionado. It isn’t about going fast, it’s about “looking” like you’re going fast … especially when you’re not moving. That’s always the way I’ve surmised; a custom is as much a personal statement as it is a work of art. It takes more than a set of Lancers, fuzzy dice, and dummy spots for one to make that automotive proclamation—quite a bit more—but not so much as to go overboard with restyling, as many have done in the past. That’s what literally sidetracked me as I was hurriedly making my way from one building to another back in 2016 at the Grand National Roadster Show: the stunning form of Scott Robert’s 1954 Merc as it was being set up for its debut. I can’t even tell you where I was headed, let alone whom I was intent on meeting up with … all I remember is spending time taking everything in that sat before me. The color, the chop, the stance, everything cumulatively was presented perfectly, and that’s coming from someone who’s very critical when it comes to the execution/presentation of a custom.

However, this isn’t an era-correct custom, a factor some will use against my describing it as perfect in any manner. But in today’s traffic environment, certain exceptions are often required, ones that better accommodate these antiquities to the conditions in which they must coexist. Amenities such as disc brakes, overdrive transmissions, and even air-adjustable suspensions (though they’ve been around since the late ’50s), to me are acceptable non-period components—not so much due to the fact they’re not easily detectable, rather because they make it easier (and safer) to drive. Scott never gave those so-called concessions a second thought, as originally this was supposed to be his wife’s car … supposed to be.

“I purchased the car with the intention to build a family custom for my wife to drive,” Scott admits when I asked him to fill me in on how the Merc all came about. “I wanted it chopped but more of a backyard build. I purchased the car on Craigslist. It was owned by an older gentleman who recently lost his license due to his vision problems. It was a superclean stock car—no surprises underneath. I first took the car to Matt at Noble Fabrication to have airbags installed. Since my wife was going to be driving the car he installed an AOD trans and front disc brakes. He also went through the car to make sure everything was mechanically sound.”

When I hear the phrase “backyard build” and chopping a top is involved—a hardtop at that—well, let’s just say my mental pictures are not that pretty. As Scott continued, my mind was put to ease, especially when he let it be known that one of my heroes, John Aiello, was part of the process. “I met Brandon Penserini of Altissimo Restoration at the Deadend Car Show. He was driving his newly completed 1955 Cadillac and it stopped me dead in my tracks. I immediately struck up a conversation with him and he told me he did all the work. After seeing his work I decided to let him chop our car. He then told me John Aiello worked at his shop and would be doing the chop. I drove the car 400 miles to his shop and dropped it off. The plan was to have him chop the car and then I would take it home where me and my friend would do some modifications and return it to Brandon for paint. Well once Brandon got the car he did not want to let it go. The build slowly started to take a turn. Having been inspired by Mark Morton’s 1954 Mercury, the thought of possibly having our car that nice was tempting. I could tell Brandon really loved the car and wanted to build something special. My wife and I decided to do it. This meant having to put everything else in our life on hold. I picked up all the OT I could at work.” Scott was quickly learning, the only corners you cut when building a custom, are those on the doors, hood, and trunk.

Above and beyond the visual effect of the redesign styling elements, color plays a very important role in how well a custom is received—both inside and out. “When it was time to paint the car I wanted something timeless and subdued. I also wanted a color that would contrast with the taillights, as they are such a decorative piece of the car. After choosing the color (Spies-Heckler custom-mix Chile Verde), we went to Chris Plante at Plante Interiors. The outside of the car was going to be smooth and simple so we took a different approach with the interior: two colors of leather with metal-threaded fabric inserts.”

I asked Scott how the experience was going from what was initially a homebuilt to what it ultimately turned out to be—and how his wife likes her new car. “This was the second car I have built and the first one was anything but fun. Building this car with Brandon and John was an incredible experience. Brandon and I have become very close friends and I cannot thank him enough. Without him this car would not have turned out like it did. We are already talking about our next build together. And, I still owe my wife a car … she doesn’t drive it because it’s too nice!”

John Aiello’s role was not only creating, proportioning, and perfecting the chop, he also has a way of softening the feel of the car. Aiello has mastered the art of subtlety in customizing. So, while the chop in itself is obvious, there’s something more about customs that he’s involved in that have a way of bringing you in, compelling you to study the car and walk around it, spend time with it, searching for answers of what was done. The Aiello way is to soften transitions, radius corners, and molding panels to prevent ugly transitions. His custom tricks often go unnoticed, as he doesn’t change things just to be custom. That theme was carried through the car—inside and out.

By eliminating vertical transitions of the body (i.e. door to front fender or rocker to fender), the panel is seamless, thus the eye is undisturbed. The flow is continued without hitting obstructions (dead-ends). Breaking up panels creates a choppy feel, further separating that transition. Instead, the focus becomes seamless and formless. No other customizer has such a keen eye for the art of softening.

The result is its viewer is mesmerized by the overall and not by the obvious. The car, the body, and its transitions invite—even urge—you to stay and experience an intimacy with these subtle custom, sometimes undetectable touches. Oftentimes, we see the viewer come back for a second or third view of the same thing, studying the car as a work of art.