Newsletter
Sign Up today for our FREE Newsletter and get the latest articles and news delivered right to your inbox.
Home » Sacrificing A Pair Of ’59 Convertibles For The Perfect 1958 Chevrolet Impala 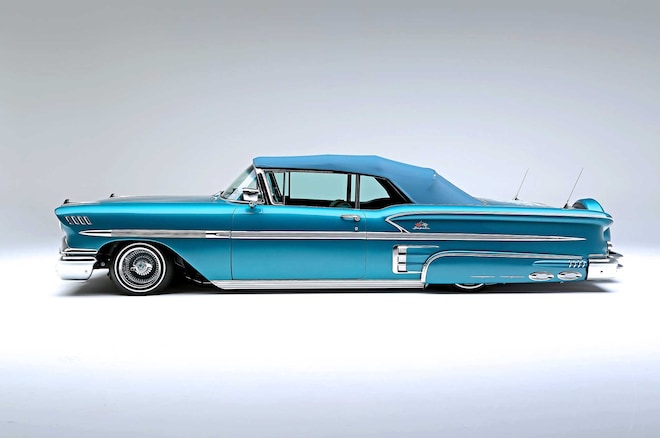 Choosing between a ’58 or ’59 Impala is a difficult choice, but what if you already owned two ’59 Impalas? At that point, the decision-making process seems a bit easier, and the ideal choice would be to get rid of one ’59 to acquire a ’58, but not for Leonard Miera.

In Search of “The One”

Having owned just about every desirable classic convertible, Leonard would be quick to admit that he’s had fun, but he’s a perfectionist at heart and admits, “I’ve owned a lot of cars in my time but there hasn’t been that one I could truly say was perfect.” That said, he set out to build the ’58 of his dreams, so he took action and sold not one, but both of his 1959 Impalas in order to fund his dream project.

With both rides sold and money in the bank, he bought a ’58 Impala convertible from the East Coast. It was in dire need of a full restoration, and for that, he had his good friend Bert at the Chevy Shop spearhead the build. Once a price and timeline was agreed upon, the vert was dropped off and while Bert got on the metal work, it gave Leonard time to stock up on NOS accessories such as an autronic eye, tri-power, factory a/c, and a single piece bumper, to name a few.

The process took 2.5 years to complete but after getting it back, something was still missing. His original intention was a full factory restoration, but now he wanted the car to sit lower so he took it back to Bert to install an air ride setup, a polished exhaust system and had Mister Cartoon bless the trunk with one of his signature pieces.

In total, it took three years and $200k to complete, but Leonard can say that he’s got his perfect ride and had this to say about the build, “Everything turned out perfect. It’s not easy being patient, but if you’re able to suffer through the wait, and have the money to do it, it’s definitely worth it.”