Newsletter
Sign Up today for our FREE Newsletter and get the latest articles and news delivered right to your inbox.
Home » Ryan Kopchinski’s ’49 Ford Custom Relives The Past w/ Perfect Balance 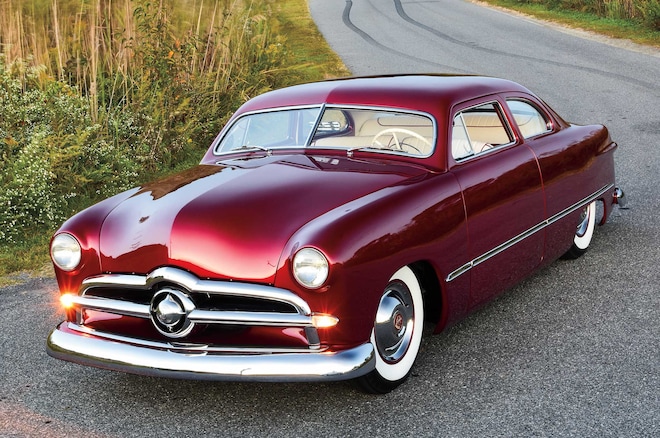 For Ryan Kopchinski of Pasadena, Maryland, getting into the automotive groove started as soon as he could walk into the family shop where his dad, Steve, was always elbows deep into the build of his latest traditional custom or hot rod. The pair formed an immediate bond, with the youngster learning the finer points of wrenching on a car while also gaining a deep appreciation for a job well done. Cruising in the family hop-ups and feeling the excitement they generated when pulling into a local cruise night permanently lit the fuse, especially when being able to hang out with their friends and checking into the latest rides on the scene. Add in plenty of time spent at large national events and the local dragstrips and it’s easy to see how his perspective was being shaped.

In a world where most of his friends were focused on import tuners, he was obsessed with Fox-body Mustangs and vintage muscle cars packed with amped-up V-8s turning solid times on the quarter-mile. By the time he got his license it wasn’t long till he was wheeling one of a dozen Mustangs he would eventually own, many of which were destined for the dragstrip, while doing all the work in the family shop. While the track held plenty of adrenalin from racing, he still enjoyed cruising in customs since his dad and many of their family friends were devoted to shoebox Fords. There was just something so cool about them that brought him back to his teen years, enough so that he made a decision to start the search for a suitable 1949-1951 Ford to act as a base for his vision to rise.

After looking at countless cars it was by chance that Steve found just the right listing online for a 1949 Ford two-door sedan in California that had been started down the custom path, having already been chopped, giving it a great profile. The car was dented, in primer, without glass, and not running, however it had plenty of soul, so a deal was made and it was shipped back East to start its resurrection.

Upon arrival the pair studied its finer points and set a game plan to bring it to a finished level. Since it was to be a traditional custom it was obvious that the stance would have to be spot-on, so the stock chassis was updated. Starting out back a Ford Maverick 8-inch rear packed with 3.55 gears suspended in place by a Gambino Kustoms Ford Taildragger kit featuring their exclusive custom-fabricated brackets and mounts, triangulated four-bar, and Firestone ‘bags combined with an Air Lift Performance Autopilot V-2 air management system. Up front Jamco upper and lower tubular control arms meet matching 2-1/2-inch dropped spindles with Firestone ‘bags completing the stance. When it comes to slowing speed, a Jamco dual master pushes fluid through steel lines to Ford drums out back with Jamco 11-inch discs up front. Linking it all to the street you’ll find a set of stock 15-inch Ford steelies capped with Coker American Classic wide whites crowned with gennie 1952 Cadillac hubcaps for a timeless look.

There’s nothing quite like the sound of a wicked Flathead mill to give your custom a signature between the ‘rails, so Ryan called on Paul Hogge of Pasadena to bring the goods. A 1950 Merc block was massaged to 284 ci and packed with plenty of go-fast bits, including a Scat crank linked to Eagle rods wearing Ross Racing pistons given a heavy thump from an Isky stick. Finned and polished Navarro heads make plenty of power, especially when fed though an Offenhauser two-pot intake sucking fuel though a pair of Stromberg 97-series carbs wearing an Eddie Meyer air cleaner all polished to the hilt. To channel power a warmed-over Ford C-4 trans from CT Transmissions of Glenburnie links to a custom driveshaft to put it all to the ground.

Creating the ultimate signature of any true custom are the subtle modifications to the body, and if the devil’s in the details, he’s wearing a Cheshire-grin. Getting started, the car as purchased had a perfectly balanced chop, starting at 5 inches up front and gradually progressing to 7 inches out back to create the ultimate profile. From there Ryan worked with family friend Pat Guthrie, well-known for his customizing skills, to create the stainless moldings, french headlights and taillights, nose and deck the body, and round the door and trunk edges. From there Roy Jordan stepped in to work his magic, which included crafting the custom inner fenderwells and firewall as well as peaking the hood and taking on numerous other tasks. From there the floors and trunk were updated and lower exterior body patch panels installed. The body was then metal finished with all gaps being massaged to perfection. To lay down the vibe Ryan went to Dave Cornwell at DC Hot Rods in Laurel to complete the bodywork and get everything razor sharp. He then put down a lustrous coating of PPG Merlot Jewel, bringing it all to life.

Inside is the perfect complement, with the original dash filled with dials from Haneline to monitor the vitals while an original Ford Crestliner wheel carves the course with shifts pulled through a stick from Lokar. The interior was then treated to stunning maroon and white rolled Naugahyde with complementing loop carpet by Bobby Moore at Evolution Creative’s in Hampstead.

This is one traditional custom cruising the streets of Maryland keeping the torch lit for a future generation, and we totally dig it!