Newsletter
Sign Up today for our FREE Newsletter and get the latest articles and news delivered right to your inbox.
Home » Rico Chips’ 1963 Chevrolet Impala 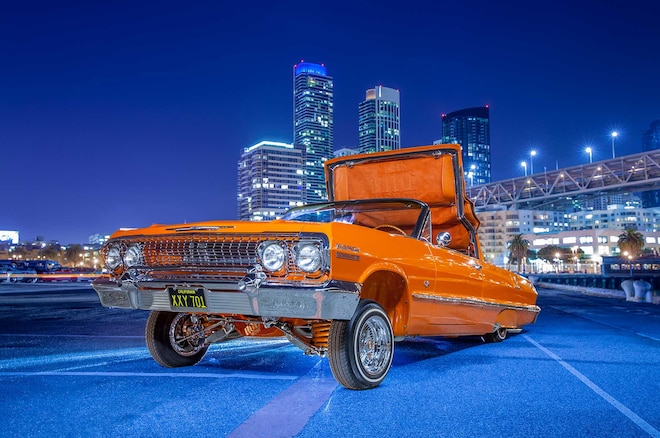 If you remember coverage of Super Bowl 50, there was much to remember but one thing definitely stood out, and that was the orange 1963 Impala that was riding up and down the boulevard behind the scenes. With that image deep in thought, I decided to do a little research (aka Instagram stalking), and I was able to find out that the Impala belonged to man known as Rico Chips.

With a moniker like that, it didn’t come as s surprise to see the Frisco native draped up in Versace and Gucci. Then again, he’s not your average lowrider, and he was the first to admit that his lifestyle was on full lux. “I’m an international gentleman of leisure and nothing can hold me back from my true passion of lowriding,” Rico, who purchased this 1963 way back in the ’90s when he was in high school, says. “I bought it off my cousin who made me promise to give him first dibs if I ever sold it.”

Rico began the build by sending the frame off to 760 Kustoms, where he had it fully wrapped and molded. “Your game is soft if you ain’t frame-off,” Rico exclaims. With the frame off, Anthony Arroyo stripped the body to bare metal, and then he doused it with House of Kolor tangelo pearl paint. All the while, West Coast Plating was busy dippin the convertible rack, bumpers, and plenty of parts in chrome.

Displacement came by way of Pechavar Racing who installed a 383-stroker motor with a lot of aftermarket goodies. Inside, a suede headliner and Dakota Digital gauges accessorize the interior and the final touches came by way of some mural work done by Alberto Herrera. Of course no Bay Area ride would be complete without a set of Zeniths.

Being featured in LOWRIDER was always a dream for Rico and that day is finally here. Congratulations on the coverage … it’s well deserved and been a longtime coming.