Newsletter
Sign Up today for our FREE Newsletter and get the latest articles and news delivered right to your inbox.
Home » 1963 Chevrolet Impala Convertible Lives Up to its “Trophy Wife” Title 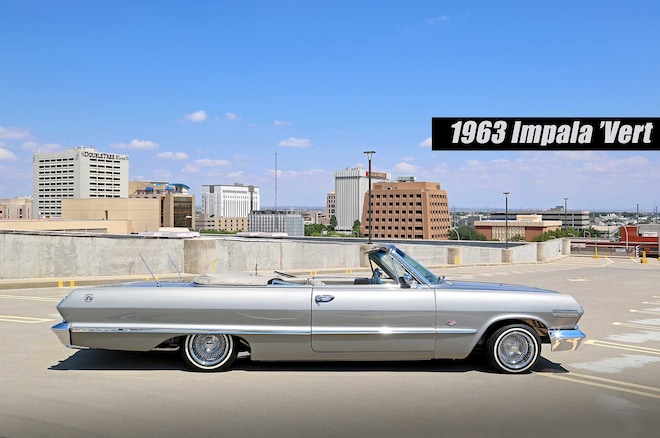 Building a 1963 Chevrolet Impala Convertible is often a lengthy process. It takes up your time, soaks up your finances, gives you plenty of headaches and in the end, can sometimes go from being a side piece to a “Trophy Wife.” Just ask Raymond Ruiz, owner of this ’63 ‘Vert that he refers to as his trophy wife simply because it’s beautiful, a status symbol and a classy lady that requires plenty of attention.

An avid lowrider, Raymond always flirted with the idea of building an Impala. “I’ve always loved the bodylines on the ’63,” says Raymond. One day he had enough and knew he had to pull the trigger and his search took him all the way to Indiana. It was there that he spotted a ‘vert in need of new floors and quarters, but he didn’t mind, as he saw potential.

He took the once neglected hood rat to Albuquerque Classics where they stripped her down and brought her body back to life. Vidal shot a fresh coat of Chip Foose Design silver paint over the entire car and from there, the frame was reinforced, a half-inch extension was added to the arms before Anthony Smith and Chris Coca dropped in a 383 stroker powerplant. Orlies Hydraulics then added a two-pump set up while Issac Cordova handled the audio. Final touches included a new interior by Gotcha Covered and a fresh set of 88-spoke Daytons.