Newsletter
Sign Up today for our FREE Newsletter and get the latest articles and news delivered right to your inbox.
Home » 1961 Chevy Impala Convertible Living In The Vegas Lime Light 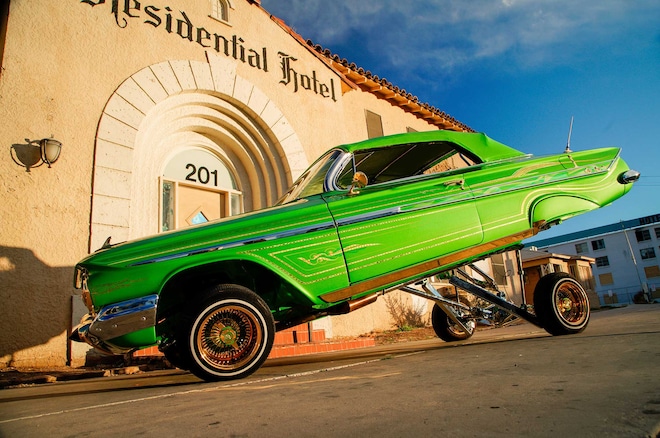 This 1961 Chevy Impala convertible is a product of seizing opportunity because In the lowrider scene, it’s not uncommon to see potential in someone else’s car. Even more common is builders selling their current rides in order to move on to the next project.

When Mike “Cracker” Thiessen of Las Vegas was asked to help broker the sale of a friend’s car, he was immediately inspired to take on a new project. So instead of helping to sell his friend’s ’61 Impala, Mike decided to sell his personal 1963 Impala Convertible, and purchase the ’61 for himself. In a matter of months, it was taken apart inside of Mike’s garage and the upgrade was on its way.

His first step was to pull off the frame and send it to Lil’ Greg at TKO Customs of Las Vegas for a complete metal and bodywork makeover. After that, Mike and his Streetwise club brother, Jesus Nunez, brought it back to life with a Matrix 2-Stage green paint scheme, all done inside the garage.

From there, Zack Felix, of Felix Designs in Las Vegas laid down pearl patterns on the side trim and candy leafing throughout. Two murals were done for this car: the first and most prominent was a tribute to Mike’s East Las Vegas roots on the trunk, done by G.R. Coronado in Los Angeles, CA. The second addition is a small mural of Mike’s family done on the firewall.

The Impala’s unique exterior was complimented by a clean, stock-style green interior done by Wizard in Las Vegas. The next step was to install a 383 Stroker engine that, along with the entire undercarriage, had been chromed with gold trim. Mike upgraded the Impala’s existing metal frame by giving it a molded show-look. It came with Black Magic Hydraulics when he purchased it, but in an effort to make it hop 80″, it was upgraded to a 4-pump set-up along with 18 batteries to power it up. His goal: “make it the cleanest hopper out there.”

From the time that he was asked to help sell this ’61, Mike could already imagine its potential. The fact that he sold his “finished” ’63 ‘vert in order to make his vision for the ’61 come to life is a true testament to the lowrider culture he lives and thrives upon in the always-evolving customization culture. Watching his vision become a reality, and then seeing this clean build also win hopping contests has been a surreal journey for this Las Vegas lowrider.

Nickname
Ain’t The One

There is no limit to the lengths a car enthusiast will go to, and John Gasparyan is prime example of that with his wide collection of Chevy Impalas and Cadillacs.

When Gerardo Raya was 11 years old he attended his first car show and almost immediately fell in love with lowriding.