Newsletter
Sign Up today for our FREE Newsletter and get the latest articles and news delivered right to your inbox.
Home » From King of Hopping to a Showstopping 1983 Lincoln Continental Mark VI 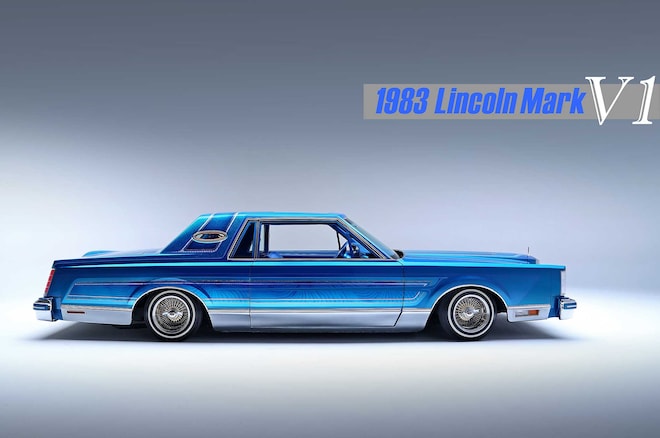 Back in the day, Tony probably never thought he’d have a full-blown show car like this 1983 Lincoln Continental Mark VI. In fact, we can pretty much guarantee it because back then, his sole focus was on hopping and his mission was to win the title of “King of the Streets”—an accomplishment he earned back in 2002. But after bagging the title, he decided to flip the script and set forth on a new goal to build a luxury street ride, and that’s precisely what he did.

With a new goal in mind, Tony didn’t have to go far to find his baby Lincoln. In fact, he found one for just $2,400 located just a stone’s throw away from his house. It was a one-owner car in excellent condition and according to Tony, “It was so clean that I didn’t even bother negotiating for a lower price.” He would go on to enjoy the car as-is for the next few years, but after receiving an insurance payout for his pickup truck which had been stolen, he shot on over to see his friend George at Kandy Connection. Tony wanted to see how far he could go on the Lincoln with the insurance money and George basically told him that a badass car could be built with that money.

Before Tony even had a chance to respond, his friend Armando took a razor blade to the top and began tearing it off. Caught off guard, Tony yelled, “What are you doing?!” and his friend replied, “There’s no going back now!” and by the end of the night his car had been completely stripped down and Tony would be the first to admit he felt overwhelmed and didn’t know what he had gotten himself into.

Within a month, the bodywork was complete along with a slew of mods including shaved fender vents, door handles, mirrors, emblems, as well as the addition of a 44-inch moonroof. From there, a custom candy was applied by Kandy Connection, while Walt Prey finessed some pinstriping and final detail work. “During the build I used to listen to the ‘Dream On’ by Aerosmith. I had no intention of using that as a name for the car up until Walt told me one night, ‘Tonight I will dream on and see what I come up with.’ It was at that point I decided to call the car ‘Dream On.'”

With the car prepped and ready for shows, Tony spent the following eight years showing and winning a variety of car shows until the unthinkable happened. He damaged the driver side door and quarter panel, but luckily for him, his team wasted no time getting this showstopper back on track and in the process, added patterns to the door jams, stripping in the interior as well as the trunk panels and new Adex dumps. He was able to bust out the makeover version at the 2019 Arizona Super Show.