Newsletter
Sign Up today for our FREE Newsletter and get the latest articles and news delivered right to your inbox.
Home » Looking GQ In This 1981 Cadillac LeCabriolet 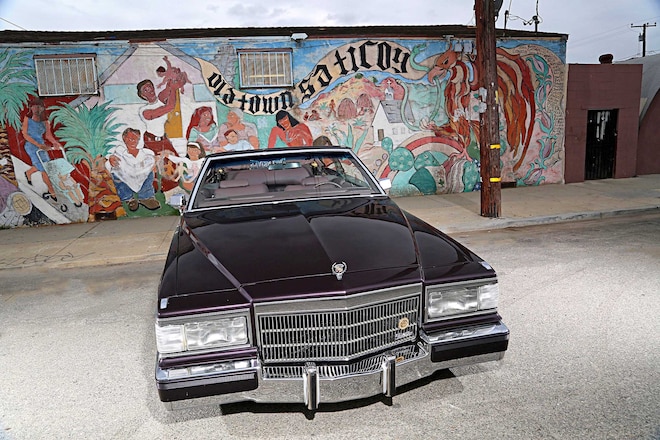 For Andres Orozco, living in Old Town Saticoy came with its fair share of surprises, but among them the best had to be watching friends and family cruise by in their lowriders. This became the highlight of his younger years and the platform that left him daydreaming about the day he could also join in on the fun.

By the time he was 16 he began working at a roofing company and his very first check went into buying himself a Buick Regal. “I was pumped! And I was dumping all the money I made into it,” Andres exclaims. But the joy of building his own lowrider took a backseat to playing around on the streets. When his luck ran out (and after paying his debt to society) he was released with a new outlook. With the help of a loan from his brother-in-law he picked up yet another lowrider. The loan was given to him after his brother-in-law saw the passion Andres had for lowriding, and he thought it was the perfect way to keep him away from trouble.

With that loan, Andres purchased a 1983 De Ville. “I named it ‘El Catrin’ (which loosely translates to ‘looking GQ’) because Cadillac has always been a sharp-looking ride to me.” Shortly after that he built a Fleetwood he named “El Catrin II.” After building it, he was once again offered the right money so he sold it.

With a bit of experience under his belt, Andres felt ready to level up and build a LeCabriolet, and the end result is featured here. Of course the hardest part was finding one, and it was a task that proved to be much more difficult than he expected. The few that he did find were too far. Then his friend mentioned to him that he had a conversion for sale. “To be honest I wasn’t too excited about a conversion, but I decided to take a look.” Upon seeing it, he realized that it would be a good project, so he struck a deal and got to work.

Unfortunately for Andres, when he began taking the car apart he found out that almost everything had to get redone. “Every time I thought I was ahead on the car, I found out it was trash and a lot of it needed to be redone.” Needless to say, he got on the drawing board and laid out his plan of attack and in 2 1/2 years “El Catrin III” was good enough to hit the streets. The ultimate payoff was taking it out for its first summer cruise with his wife and kids.