Newsletter
Sign Up today for our FREE Newsletter and get the latest articles and news delivered right to your inbox.
Home » Kent Matranga’s 1962 Chevy Bel Air – GNRS ’19 Spotlight 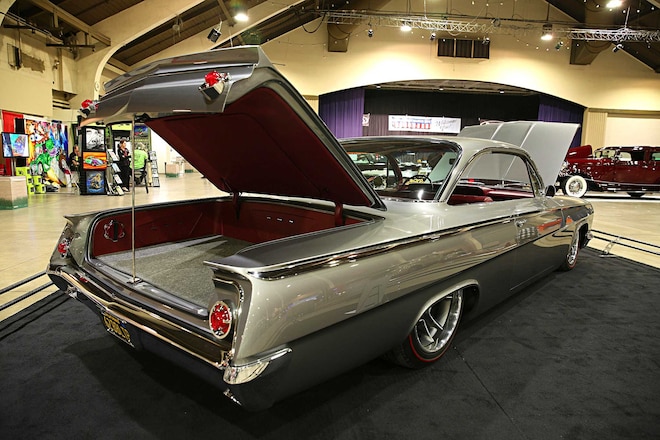 I’ve worked for Lowrider for about seven years now and during that time I’ve seen my share of Chevy Bel Airs slide across my desk. Considering how popular they are it’s no surprise that the majority of Bel Airs that come my way are Tri-Fives. In fact, in all the years I’ve worked at Lowrider, off the top of my head, I can remember seeing just a handful of pre-1955 Bel Airs and only one 1961 bubbletop. This is why when I was walking around the 2019 Grand National Roadster Show I was so intrigued when I came across this 1962 Bel Air bubbletop.

Owned by Kent Matranga, this 1962 was built by Andy Leach and his team at Cal Automotive Creations. Sitting pretty on Billet Specialties Grinder wheels, thanks to its RideTech coilovers, this bubbletop features hand-formed floorpans, firewall, and belly pans, as well as handbuilt front and rear bumpers, extended fenders and hood, and a custom decklid with an incorporated spoiler. Underhood are handbuilt inner fenders, core support, and, the heart of the beast, a 639hp Chevy LS9 topped off with a custom engine cover with integral air filter and mated to a Bowler Performance T56 six-speed transmission.

After some Googling, we discovered this Bel Air is no stranger to winning awards, having beaten out 24 other top-notch builds to win the highly coveted Barrett-Jackson Cup in 2015.