Newsletter
Sign Up today for our FREE Newsletter and get the latest articles and news delivered right to your inbox.
Home » It’s “Checkmate” with this Custom PPG Grey 1962 Chevy Impala Convertible 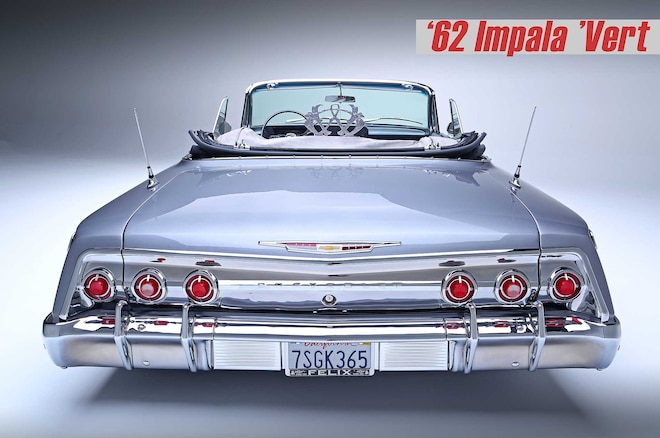 Like so many others in search of their next project car, Jorge Moraza hit the famous Pomona Swap Meet where he found this 1962 Chevy Impala Convertible, which he recalls, “the paint looked good along with the trim.” He went back and forth for a while and eventually worked out a deal in the mid $20k price range.

Overall, the car was in great condition except for the fisheye paint. For those that don’t know, fisheye refers to small craters/holes that appear on the painted surface. The flaws in the paint weren’t going to go along with the final vision Jorge had so he decided to take it to C&C Customs to have it completely redone. There, the old paint was removed and the bodywork was accomplished before Oscar Valdez began laying down the custom grey PPG paint.

The next step to the build was taking the ’62 to get its suspension done at Hoppos. The original rear end was shortened to make sure the wire wheels wouldn’t rub against the skirts and the a-arms were molded and extended one inch. Alex at Hoppos then installed an air ride setup that mimics that of a gravity fed hydraulic setup.

The last stop was California Upholstery were Joe stitched together the custom grey leather seats, built a center console and also put together a sound system. “When we picked up the car from the upholstery, I said ‘Checkmate’ to it finally being done and the name just stuck with it.”