Newsletter
Sign Up today for our FREE Newsletter and get the latest articles and news delivered right to your inbox.
Home » Joel Alvarado’s Rusted-out ’62 Impala Turned Dream Car 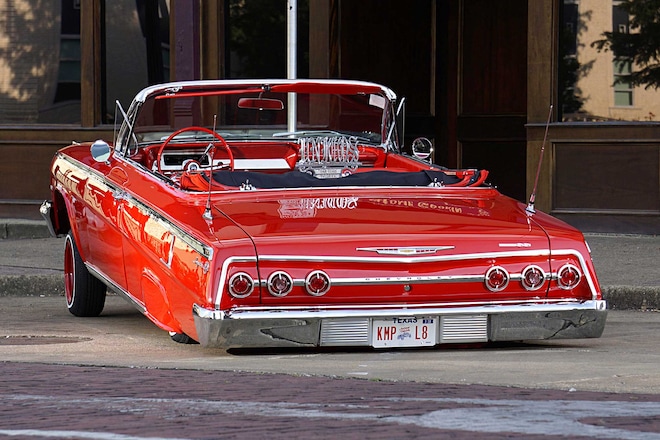 Growing up, Joel’s entry into the lowrider game began with a 1979 Monte Carlo. As years passed, he wanted to get into something classic, something with a bit more soul, so he was determined to get a 1961 Impala—but also knew he would settle on just about anything in the ’60s so long as it was a ragtop.

As most stories go, he started scouring the ‘net to find his next project and stumbled across a 1961 convertible that was so rusted even he wouldn’t go for it. Soon after, he spotted a 1962 Impala rag but the only dilemma was the car was located some 17 hours away. Needles to say, it looked good, the deal was right, and he was able to convince his brother, Edgar, to take the trip with him to Minnesota to pick it up.

Upon their arrival, he was amazed at the size of the property. “The property was a few acres and it was full of classic cars scattered all throughout,” Joel says. As they began to trek through the property to locate the 1962, the tension and excitement began to build, but once he saw the vehicle his heart dropped. The car had rust damage that wasn’t addressed or pictured in the ad—and it was bad. Not wanting to go back home empty-handed he bit the bullet, did a little negotiating, and took the chance and purchased the car.

During the trek home, Joel’s disappointment soon turned into excitement. He began a mental checklist as to what he wanted to do and as soon as they pulled up to his dad’s shop they began tearing it apart, which is when he realized the full extent of the rust damage. “The floors needed to be replaced from the front to the back. The quarter-panels, front clip, and door were rusted; the interior had no seats; and to top it off the back of the frame had been chopped off.” The car ended up being a nightmare, to say the least, but Joel had a vision and nothing was going to stop him until he could make it come to fruition.

Joel was only 21 when he purchased his convertible and like many 21-year-olds, he didn’t have a lot of income coming in, so he took matters into his own hands and began working on it. At times he was too busy to work on it, and between a lack of time, lack of motivation, and lack of money the car would sit for months. “I spent weekends at the shop working on it while everyone my age was out partying,” Joel says. At one point in time, he began to wonder if the car would take so long that he’d die before it was completed, and that woke him up. He didn’t want his life to be wasted without completing what he set out to do. After becoming more financially stable, he began dedicating more time to the build.

Six years later, his drive, ambition, and resilience brought his dreams to life and while he still has more things to do, he’s glad that he can run the streets knowing that the past few years weren’t a waste.