Newsletter
Sign Up today for our FREE Newsletter and get the latest articles and news delivered right to your inbox.
Home » Joe Guzman’s 1962 Chevy Impala 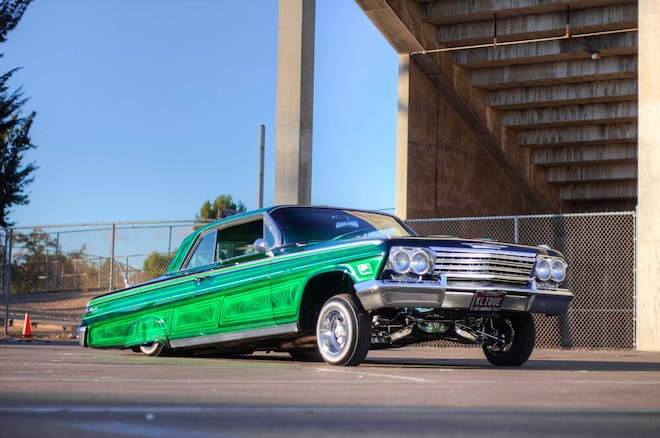 Since he was a teenager, Joe Guzman of Anaheim, California, has always wanted to own a lowrider. He knew it would take time and a lot of hard-earned money to make that vision a reality. With patience and of course some persistence, the right car at the right time and place presented itself to Joe in the 2004. Good friend, Shawn, told Joe about a ’62 Impala that was for sale in the nearby Buena Park. Joe decided to go see it. Once he laid eyes on the classic car, he knew it was the one!

After bringing it home, Joe eventually had the car painted a light green and did some basic upgrades to the ride to get it to that lowrider style he liked. However, after a few years, an idea sparked in his head to take his Chevy hardtop to the next level. He decided to do a complete makeover on the ride, totally repainting it with a candy green finish, custom patterns, flake, pinstriping, leafing, and eye-popping murals. The interior also received quite a makeover as well: dashboards and custom center console received paintjobs to match the car’s exterior, and the seats and door panels were reupholstered with brand-new green vinyl.

There is no doubt that this ride is ready for pulling some awards at car shows, but that won’t stop Joe from cruising it on the streets from time to time with his fellow Klique Car Club members. Joe gives thanks to everyone involved with helping him build this car, especially Alex Placencia at Big Al’s Body Shop. Joe says it was Alex who was always there for him when he needed help with this ’62. Joe may be done with the car (for now), but he says he has a convertible ’62 Impala in the works, so be on the lookout for that very soon!

Body/Paint
Alex Placencia of Big Al’s Body Shop in La Habra, CA, did the necessary bodywork before laying down a candy chameleon green finish with mini flakes. Manny’s Pinstriping of La Habra did the silver leafing and pinstriping and Mark Whittaker lent his artistic talents of airbrushed murals depicting an Azteca princess with Azteca warriors. A 42-inch electric sunroof with green-tinted glass was also installed.