Newsletter
Sign Up today for our FREE Newsletter and get the latest articles and news delivered right to your inbox.
Home » Custom Engraved 1964 Azure Aqua Chevrolet Impala Convertible 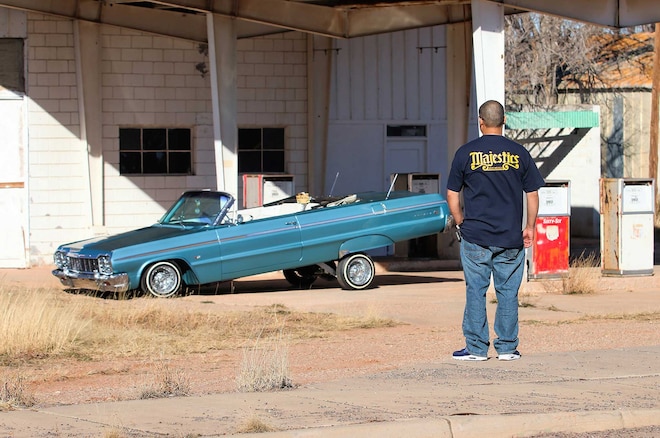 The 1964 Chevy Impala you see pictured is the result of taking the slow and steady route. Lowriding, much like any other part of car culture, is a lifestyle that can be experienced in a multitude of ways. In its simplest form, the cost of admission is owning a lowrider, but to get there, some are more comfortable having their car built, while others take a more hands-on approach and do it themselves. It’s really a matter of choice, pride, time and available funds, but if you were to ask Jeremy Sena, owner of this ’64, he’ll tell you that he belongs to the latter camp.

He remembers being 10 years old and learning about classic cars by observing his Uncle Anastacio “Stash” Sena build them. These were fascinating times filled with curiosity and intrigue and as a result, he’d go on to apply his newly acquired skills to creating his own lowrider bike. By the time he got his driver’s license, Jeremy was eager to build a car and that’s when he came across a ‘64 impala SS convertible that his friend Johnny Sanchez was selling. It had recently been painted its original Azure Aqua, and while the car was mostly original, Jeremy had other plans.

Once he got the car home to Clovis NM, the teardown began and that’s when he discovered minor blemishes. As a commercial truck driver, his time was limited to nights and weekends, so the car took quite some time to get dialed in. As the President of the Majestics C.C. (NM chapter), he also wanted to make sure the vehicle met the club’s standards, so he took his time and paid attention to the fine details. That said, bins of parts were sent out for chrome and engraving and with the car disassembled, he cleaned up the frame and did a partial wrap. In addition, the engine bay was cleaned up, prepped and painted, and once the refreshed motor was dropped in, the interior was treated to new guts with a two-pump Pro hopper set up backed by 4 batteries.

The car is now a part of the South Western car scene and a great representation of lowriding and a car culture that is powered by tradition, passion and pride.