Newsletter
Sign Up today for our FREE Newsletter and get the latest articles and news delivered right to your inbox.
Home » Highly Desirable Rochester Fuel-Injected Bel Air Convertible 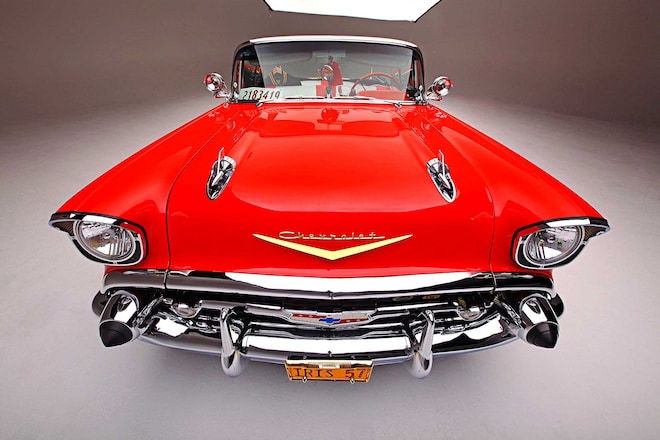 One day while showcasing his 1957 Chevy Cameo, a spectator who had been eyeballing his ride approached him. The man asked him it was for sale, and after already experiencing countless offers from a bunch of no shows, Manny Garcia decided to give him his number thinking it would be yet another tire kicker.

A few months later Manny gets a phone call from the guy he had met at the show who lets him know that he’s still interested in buying the car but he was waiting to unload a car before picking it up. As luck would have it, Manny asked the man what he was selling and it ended up being a 1957 Bel Air convertible. At that point, the lights went off in his head; his wife had long wanted a 1957 convertible so he decided to look further into it.

When he saw the vehicle he was floored. Not only was it a 1957 convertible, it was also a numbers-matching, fuel-injected version. To top it off, the seller (whose name was Billy), had inherited the car from his father who purchased it brand new in 1958. It turns out Billy was now moving to Hawaii and he didn’t want the salt from the sea ruining the top so he decided to sell it.

Needless to say they stuck a deal and $30,000 later Manny finally had his wife’s dream ride. When asked how he felt after closing the deal he says, “I remember when I was hauling it back home in the trailer. I still remember how I looked in my rearview mirror and still being in disbelief that I had finally gotten a 1957 rag.”

To get the ragtop to this level has taken Manny two years of researching and hunting down as many accessories as he could find. Among his finds was the extremely rare automatic top raiser for the convertible. This option allows owners to park their convertibles with the top down without worry, as the first drop of moisture the top will automatically cause the top to be raised.

Other rare options in this exquisite build include the vacuum ashtray dispenser, dual power antennas, power seats, and just about every option that was offered for the 1957. “My favorite part is the original Rochester fuel injection because it makes it one of six 1957s ever made with that color combo and options.” While we couldn’t verify that there were only six made in this color combo and options we do know for a fact that it’s extremely rare to find one, so we will take his word on it. Besides, with a car that looks this good and so well put together there’s no doubting that he knows what he’s talking about.