Newsletter
Sign Up today for our FREE Newsletter and get the latest articles and news delivered right to your inbox.
Home » Fully Restored 1957 Chevrolet Bel Air 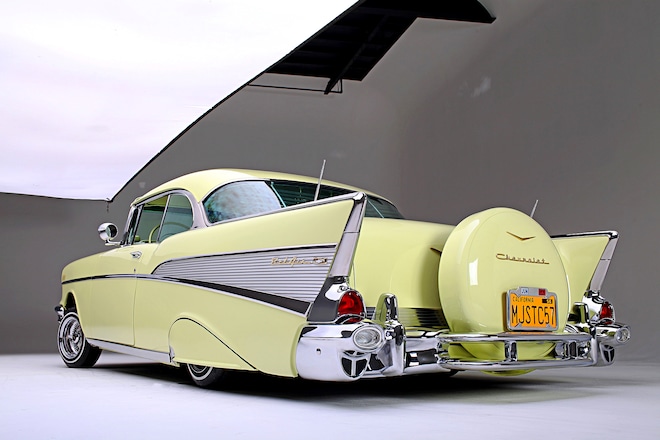 Simply put, the 1957 Chevrolet Bel Air is often referred to as an automotive icon, and it’s with good reason. The distinct look of this classic coupe is defined by its short tailfins, headlight pods, and wrap-around windshield, but when coupled with the right color (as found here), it’s a soothing piece of automotive artistry you can stare at all day.

Used many times as a silhouette, which has become representative of the late ’50s and ’60s, this Bel Air owned by Mike D. out of San Diego, California, is simply incredible. The attention to detail on his build is bar none and we wouldn’t have expected anything less, as Mike is the owner of his own autobody shop. With a build time of only four months, this incredible piece of machinery represents not only lowrider culture but the Majestics Car Club San Diego.

Sitting pretty on a set of 96-spoke Zenith wire wheels, the stance on this ride is perfect and gets ground contact through a set of 155/80R13 Firestone tires. The structural integrity of the Bel Air frame was reinforced by ASC Speed Metal, and from there it was mated to a set of ASC Speed A-arms, along with a bevy of CPP products and Big Kids Hydraulics Coils.

Moving on inside, the perfectly revamped interior by Linoy’s Upholstery is period correct, and sports the proper embossed vinyl with the mandatory OEM cloth inserts. As your eyes span the length of the perfectly painted dashboard, the only signs of modernization are found in the digital gauge cluster.

In all, this incredible build is simple yet effective and not overly refined or customized. It has all the raw essentials to make this car a heavy weight contender, but it leaves enough of its raw factory form to show the quality of the restoration—and a prime example can be found in the trunk area. Whereas some choose to use decorative panels on the trunk setup, this raw and unadulterated build lets viewers see just how much attention to detail was spent inside and out. Again, testament to the fact that simplicity is often the key to making a truly charming build.

Engine
Westside Automotive installed the OG 350 with Headman headers and Flowmaster exhaust. Miguel Aguirre wired everything after he assembled the motor.

Interior
Dakota Digital gauges and an original cream interior kit from Ciadella that was installed by Lindy’s Upholstery.

Sound
Chuy installed the Alpine deck Beyma 6×9-inch speakers and the two 10-inch Rockford Fosgate subwoofers are cleverly hidden in the ice chest as well as a tool set.