Newsletter
Sign Up today for our FREE Newsletter and get the latest articles and news delivered right to your inbox.
Home » Finally Getting To Cruise In This 1994 Cadillac Fleetwood 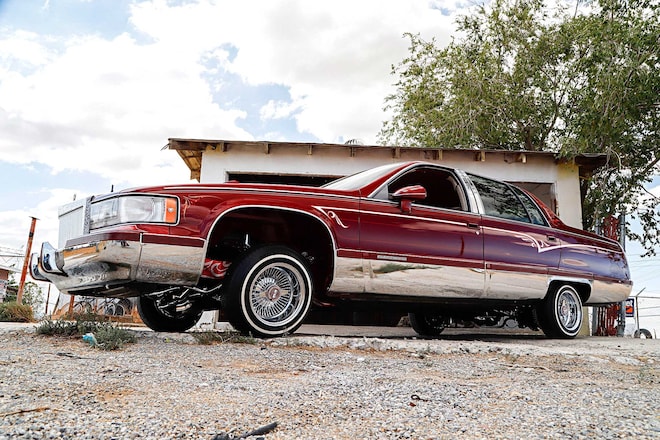 Building a lowrider is hard enough. Now imagine how much more difficult it would be doing it while raising a family that includes six children. While we penny pinch and do whatever it takes to make our automotive dreams come true, we often forget that everyone in the family gets to go along for the ride while the car is being built. Those Top Ramen dinners will eventually be rewarded with cruises to the local hangout spot to show the world what you’ve created. But for any kid, the process can feel like an eternity. Jesse James Blaylock, of Antelope Valley, California, has his entire family to thank for making the sacrifices needed to make his childhood dream come to fruition.

As a child, Jesse became infatuated with the lowrider lifestyle and as time passed he went on to own several different lowriders. He was, however, always chasing his dream car, a Cadillac Fleetwood—the king of all big-body Cadillacs. The local Auto Trader served as the launchpad to make “Dirty Red” come to life. All Jesse wanted to do was build a “lay and play” car; the lowrider gods however had something else in mind.

What would eventually end up as a full show car first started with a visit to Jesse’s Auto Body in Lancaster, California. There it was prepped and covered with a two-stage medium Garnet Red and then accented with miles of pinstriping and silver leafing, along with murals to all four doorjambs. The vehicle’s frame carries the same paint scheme, which showcases a completely polished and chrome plated and engraved undercarriage. From there the interior was reupholstered in red suede inserts surrounded by cream ostrich materials finished with painted panels, LED lights, and the mandatory Nardi steering wheel, while the rest of the build includes a brand-new Homies custom hydraulic setup, upgraded engine compartment, and a new set of 72-spoke chrome wire wheels.

All the kids, especially Vivi and Vince, cared about was finally getting to cruise. Fortunately for them, the sacrifices are over, well, at least till it comes time for them to build their own lowriders.