Newsletter
Sign Up today for our FREE Newsletter and get the latest articles and news delivered right to your inbox.
Home » Double Cancer Diagnosis Turns Into This 1962 Chevy Impala 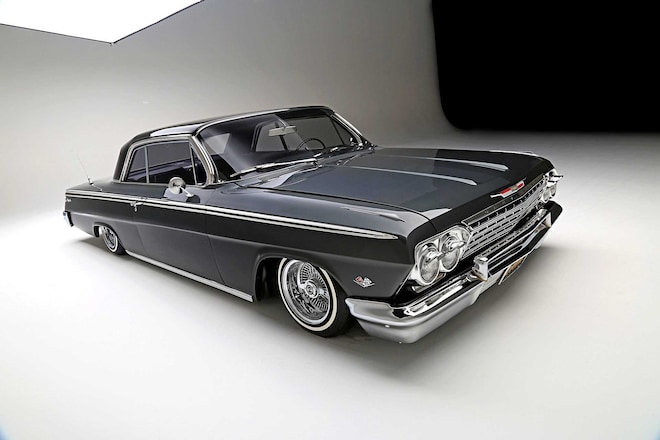 Eddie has always had a fascination with lowriding, but among all the models to choose from he was particularly fond of the 1962 Impala. Once he was financially ready to pull the trigger his search began and it ended in El Monte, California. With the help of his wife, Angelica, they found a 1962 that had been left for dead. It was in rough shape and upon closer inspection he found that the car was half primered and a coffee can had been used as an interim gas tank. “It was in major need of some TLC,” Eddie explains, but as he readied himself for the restoration it sat for yet another six months.

When the project finally began, the first thing they had to do was look for a painter; Angelica took the lead and found West Life Customz. After placing a call, they came over to look at the project and gave Eddie an estimate and from there a deal was sealed and the car was shipped off. Once the car had been taken apart, the shop called Eddie with the bad news. The 1962 had a severe case of cancer. Ironically enough, a few months later, Eddie himself was diagnosed with cancer. “I remember the day I went up to my car, put my arm on the roof, and began talking to my car. I told my car that we both have cancer and that we would both get through this,” Eddie says. Sometime later, Eddie went into surgery to have his tumor removed only to have it return a year later during a routine checkup. It had come back stronger than ever, but Eddie was no quitter. He underwent harsh chemotherapy treatments and according to Eddie, “It’s hard to accurately describe the toll it took on me.” The treatments would take between five to six hours a day, and afterward Angelica would pick him up and together they would stop by the shop to check up on the car. “My car was my motivation,” Eddie explains.

May 13, 2016, might have been an ordinary day for most, but for Eddie it was a day of celebration. That was the day he walked out of his last chemo treatment and on Christmas day of the same year his car was complete. “I received the keys to my car and I was ecstatic to know that we were both cancer-free and ready to cruise.”

Looking back, Eddie had always made a promise that they’d both be cancer free and he remembers vividly one night passing by the Kaiser hospital where he was treated. He was cruising in his 1962 and as he passed by Eddie says, “I looked at the window where I underwent my chemotherapy and I just had to thank God for getting me through those hard times. I used to sit there looking out that specific window wondering if I would ever be cruising the way I was. And here I am.”