Newsletter
Sign Up today for our FREE Newsletter and get the latest articles and news delivered right to your inbox.
Home » A Comeback With A Clean Surprise For This 1979 Chevy Monte Carlo 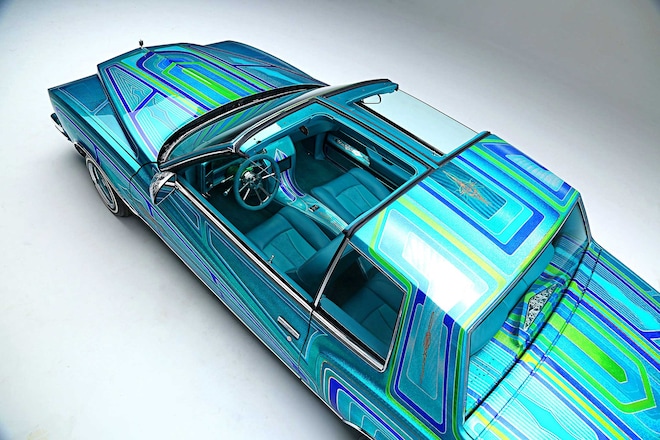 A decade after winning Lowrider of the Year (LOTY), Orlando Ceballos was planning a comeback, but this time around there was a plot twist. As word began to spread so did curiosity. Some wondered what he’d come back with. Others began to envision how extreme he’d go. But all the gossip came with good reason since his last build was a true “radical” in every sense.

Deserving of its moniker “Game Over,” his LOTY award-winning Cadillac featured a host of extreme mods. From splitting doors to a tilting front end, the Cadillac was so extreme one could only imagine the crowd’s surprise when he showed up to the Vegas Show with an ultraclean street car. “I wanted to build something I could cruise,” Orlando explains. “I wanted to build a ‘Lifestyle’ type of car that focused on paint and interior, so that became my focus.”

To begin the revamp, Orlando started bodyworking the car. While removing imperfections, his creativity led him to remove the B-pillar of the car. In the process Orlando decided to convert the quarter-panel windows into functioning, powered units. Looking to freshen up the frame, he took it all apart and sent a ton of parts out for chrome. Since his frame was apart, he decided to spray it with a candy teal, and while reassembling the car decided to throw in a set of disc brakes, helping bring the beast to a quicker stop.

Prepped and ready for paint, Orlando doused the body with a House of Kolor candy teal and then used cobalt blue, lime green, and blue pearl to lay fades, fans, fingerprint, and additional patterns throughout the car. Additional work from pinstriper extraordinaire Mike Lamberson is also found in the scheme.

With the paint complete, it wouldn’t have made any sense at all to slap it back together with stock parts, so Orlando ordered a custom grille from Krazy Kutting while Dave Castaneda engraved a bevy of parts, including the mirrors, door handles, and some of the hydraulic components. Orlando and a group of friends installed a double-whammy pump with hardlines running to four Delta dumps, two diamond-cut slowdown valves, and finished it all off with four batteries and four switches.

Inside, Juan Castro finessed a Pioneer double-din head unit into a custom center console that was then connected to a set of Alpine amps and speakers. The G-body was then shipped to California Upholstery for a complete interior overhaul. Inside they used leather and suede (colormatched to the exterior hues) while a set of newer GM seats offer passengers a plush and snug ride. Final interior touches come by way of a CPP steering wheel and the addition of a “Dia de los Muertos” mural by Albert Herrera.

As a former mini-trucker in the ’80s, Orlando has filled many shoes. He’s walked alongside the industry’s best radicals, taken home some of the most prestigious awards, and with his new build Orlando has not only elevated his skillset but contributed to the evolution of lowriding and the lifestyle we all love.

Lowrider Garage takes you on a tour of Daniels Creations—a multi-task, one-stop shop where everything happens