Newsletter
Sign Up today for our FREE Newsletter and get the latest articles and news delivered right to your inbox.
Home » Never Forgotten – Coral w/India Ivory 1955 Chevy Bel Air Convertible 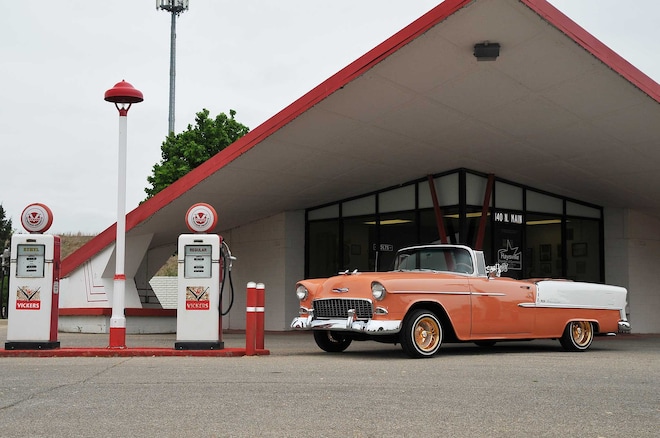 Chris Redus was born in ’55, just like his 1955 Chevy Bel Air convertible. How many people can say they own a vehicle from the year in which they were born? Throughout his entire life he had a passion for classic cars, motorcycles and antiques, but he was never able to purchase a Bel Air until he reached his sixties. He found, fell in love with, and bought a ’55 Bel Air hardtop. Once he reunited with his son Kyle, who happened to be the president of the Rollerz Only chapter in Wichita, Kansas, their bonding had Chris motivated and going into a different direction. He went from stock radials to wire wheels and found a new love for classic cars all over again.

Once his son Kyle was able to purchase his dream car, a ’58 Impala convertible, Chris began a new search for a ’55 Bel Air convertible to match his son’s dream. We all know that a convertible in any classic car is much harder to procure— that’s when Roy Hulbert stepped in. A man known for many builds and an entrepreneur who sells classics to the Lowrider community for great deals. Roy lives in Colorado, which isn’t exactly around the corner, but Kyle and Chris always stayed focused on Roy for deals. Like clockwork, Roy found and was willing to sell a beautiful ’55 Bel Air rag that fit Chris’ dream to the tee. The unfortunate part was that the money wasn’t right for Chris at the time. His goal was to sell his hardtop to finance the convertible even though it was heartbreaking to sell it at all.

Once Chris got the price he was asking, he and Kyle revisited the post and hoped and prayed the convertible was still for sale. Roy hadn’t had much luck selling this car locally and offered an even lower price to Kyle knowing the cost to travel there. The Redus guys jumped in a car and traveled the 17-hour round trip to purchase Chris’ dream car. “I remember the smile on his face when we pulled up to Roy’s house,” Kyle tells Lowrider, “It was the happiest I had ever seen my pops.” Immediately Chris jumped in the classic convertible and Kyle took a picture with his bright smile on the road. For the next three months, Chris spent every weekend in his convertible classic with his son cruising the streets and enjoying the times together.

Tragedy would strike one day when Pops was at work as he just passed out, eventually losing his life to an aneurism that nobody ever saw coming. The entire Rollerz Only family was devastated as he was like “pops” to everyone. Kyle made a pact that he would keep his memory alive by fixing up the Bel Air even more and taking it to shows around the country. Chris had an incredible impact on everyone he met and was truly an inspiration to the car club and the community. “He will be dearly missed and will never be forgotten,” Kyle adds, “Pops will be riding in paradise with me every time I jump in his Bel Air.”