Newsletter
Sign Up today for our FREE Newsletter and get the latest articles and news delivered right to your inbox.
Home » 1979 Chevy Monte Carlo Built to Rep the East Coast Lowrider Scene 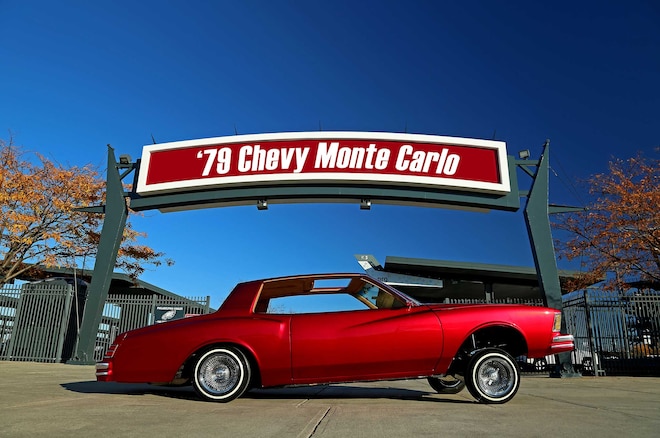 Having owned this 1979 Chevy Monte Carlo for over three decades, it’s gone through a multitude of changes and facelifts, but it should be noted that this latest version took seven years to accomplish. It’s a purpose built lowrider, used to represent a passion, and a City. “I began the makeover because I wanted to have a top-notch East Coast Lowrider” says Lefty, the car’s proud owner, and in the end, that’s exactly what he’s accomplished.

It all started in 1987 after he returned from serving in the Marines. Since he was stationed at Camp Pendleton, he decided to stay in sunny So Cal where he began working at a mechanic shop and that’s when he purchased this ’79 Monte Carlo and added a set of wire wheels along with a pearl paint job.

In 1995, Lefty decided it was time to go back to Philadelphia to be with his family, so he hopped in his Monte and drove it some 3,000 miles back—and he did it on those wire wheels. Upon his arrival, a lowrider was a rare sight to see as Lefty himself says, “When I showed up, everyone was tripping on my car. Most people hadn’t seen a lowrider in person.” They also expected his car to hop but the suspension was stock and the following year he installed an airbag setup.

During the final revamp, the air system was scrapped for a Hoppo’s gravity fed setup with four ZigZag slowdowns, Adel dumps, and three Duracell batteries, and this was just the start. He would go on to mold and extend the a-arms, reinforce the frame and from there it continued. Early in the process, he found the biggest problem was finding like-minded people that shared his passion; but when he became a member of Drastic Auto Club, he was able to surround himself with people that shared and appreciated his vision while backing it with the same enthusiasm and drive he himself had.

In the end, this long term project is one many of us can identify with, and another story that reaffirms slow and steady will always win the race.

Vehicle Nickname
Pieces of a Dream