Newsletter
Sign Up today for our FREE Newsletter and get the latest articles and news delivered right to your inbox.
Home » Building a Cover-Worthy Caprice After Two Decades 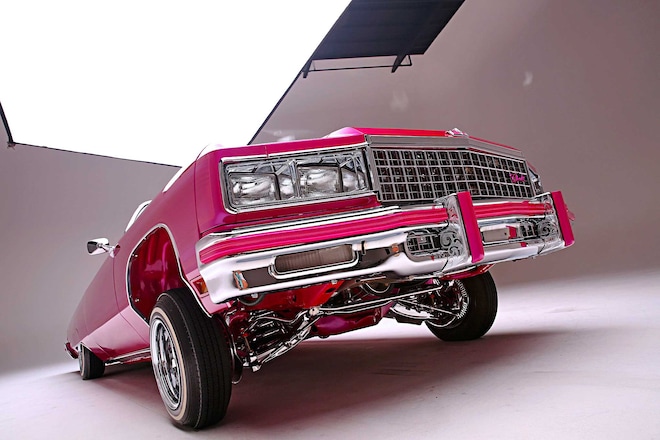 Building Caprices and being featured in LOWRIDER magazine isn’t anything new to Jaime Tapia. This is the Santa Ana resident’s sixth Caprice build and the fourth time being featured on the pages of LOWRIDER. What is new for him is landing the cover of LOWRIDER. “I looked at all the cars on the cover of LOWRIDER and used that to guide me in the build but while keeping an old-school look to it.” Jaime’s been lowriding since 1994 and he credits his start to his cousin’s love of lowriders and his father who owned a Caprice.

Jaime picked up this 1975 convertible that needed everything done to it by trading a fully done up 1973 Caprice that was featured in LOWRIDER back in 2008. “It wasn’t a straight trade since this one needed everything,” Jaime explains.

The build began when Clemente (a member of Viejitos) pulled out the original 350 motor to rebuild it. The block was painted to match the paint and a four-barrel Edelbrock carb was slapped on top. This was just the start of the motor buildup as it received ball-milled billet valve covers and air filter. Chrome headers and a water pump was added but before the motor was dropped back in, Jaime shaved the firewall to give it a clean look.

During his spare time, Jaime began modifying the car by first replacing the front end with 1976 one. This replaced the round headlights with square ones. He then shaved the door handles and molded the trunk and hood. Jazz Auto Body then received the convertible to finish the bodywork and have Armando lay the House of Kolor hot pink paintjob. Armando laid ghost patterns by using candy purple with magenta fades in the hood, trunk, sides and engine compartment. Manny Auto Art then came in to add purple and pink striping to outline the patterns and also ended up engraving all four bumper guards. Oscar Graphics added the finishing touches to the paint by airbrushing a mural of two females and the cars name under the molded trunk.

Herman Sanchez then molded the upper and lower arms and reinforced the frame, and 1995 Impala disc brakes were then modified to fit with the stock rearend. AP Show Chrome dipped everything in the motor and undercarriage (including the gas tank) in chrome.

Joe at California Upholstery wrapped the Honda Accord seats in raspberry and pink vinyl and added custom door panels with painted inserts. A custom fiberglass center console was built that went from under the front dash all the way to the back dash. It was then painted and striped to match the car. A billet CPP steering wheel and custom kick panels to house 6 1/2-inch Pioneer mids were added to finish the interior.

“Everything fell into place with the build,” Jaime explains. The only thing he had to get redone was the interior. He originally had a lighter shade of pink but once he did the top in a raspberry color he felt that the interior didn’t go with the rest of the car. Once the car was competed it sat in the garage for a year before it was taken out to a show. “I waited for my club members to finish their cars so we could all show together.”

Body/Paint
Shaved door handles, updated frontend and molded firewall, trunk, and hood. The raghouse was then sprayed with House of Kolor hot pink with candy purple and magenta patterns.